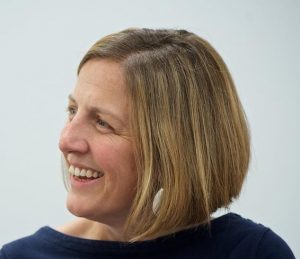 The Rev. Erica Thompson, a student in Hartford Seminary’s Doctor of Ministry program, was called on Dec. 2 as the senior minister of Asylum Hill Congregational Church in Hartford. The Rev. Thompson is the first woman to lead the 150-year-old church, which has a rich history.

Previous senior ministers – nine in all – include the Rev. Joseph Hopkins Twichell, who served as a chaplain during the Civil War and was best friend to Mark Twain, who attended Asylum Hill while he lived in Hartford and fondly referred to it as the “Church of the Holy Speculators.”

According to her biography on the Asylum Hill website, the Rev. Thompson earned her undergraduate degree in social work from Concordia College in Minnesota. She spent three years in the Peace Corps in Ecuador before attending Princeton Theological Seminary.

Her first call was as Associate Minister at Old South Union Church in Weymouth, MA, and she has been serving as an associate minister at Asylum Hill since 2006, and as acting senior minister since 2017.