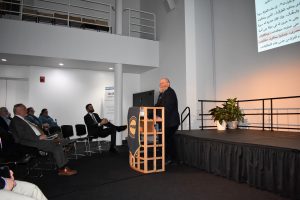 Dr. Yahya Michot delivered an illuminating lecture on The Arabian Nights on Jan. 15, 2019, then received a standing ovation when Interim Academic Dean David D. Grafton formally welcomed him to the ranks of Faculty Emeriti.

Dr. Michot’s lecture traced the Arabian Nights tales from their development in the Muslim Middle East in the 9th century to their introduction, by French translation, to Europe in 1704, and beyond. He described major English translations, as well as the Nights’ influence on literary, artistic and cultural trends in the Islamic world, in Europe and in the U.S.

Dr. Michot also connected his lecture to one of Hartford Seminary’s most famous professors, Duncan Black Macdonald, and his Arabian Nights collection, which remains in the Seminary’s library. Macdonald, for whom the Macdonald Center for Islamic Studies and Christian-Muslim Relations is named, taught at Hartford Seminary from 1892 until 1942. He has been credited with launching the Seminary into the area of Christian-Muslim relations, for which it has long held a leading role.

“He was one of the greatest collectors of Arabian Nights in the world,” Dr. Michot said.

The entire lecture can be viewed here: 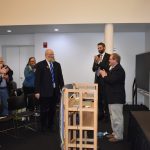 Dr. Michot is welcomed to the ranks of Faculty Emeriti. 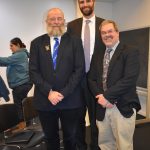 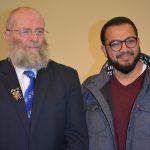