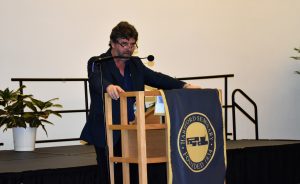 Dr. Arthur E. Farnsley II gave a lively talk at Hartford Seminary on Feb. 25 about his research on the kind of religious beliefs typical of very poor whites in Middle America and what those beliefs mean for society.

The research, based on interviews conducted at flea markets in Indiana, is featured in Dr. Farnsley’s 2012 book Flea Market Jesus.

Dr. Farnsley said the 60 people he interviewed in and around Friendship, IN, did not attend church on a regular basis. They distrusted the government, banks, and institutions in general. They tended to believe in God, that Jesus was God’s son, and that miracles happened, but they tended not to read the Bible or consider themselves “born again.” Most of them did not vote and were institutionally adrift, which meant they had difficulty functioning in civil society.

Many of those interviewed believed that “God watches over the little guy,” he said, but their distrust of institutions made it hard for them to get ahead.

The full video of the talk can be viewed below.