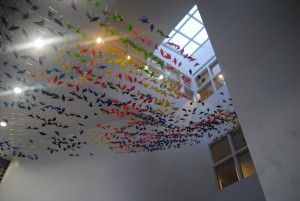 Thirteen years after attending Hartford Seminary for one semester, David Bok wrote about the seminal experience in an article titled “Dialogue Is Key to Understanding Differences.”

Bok discovered Hartford Seminary through MUIS, or the Islamic Religious Council of Singapore, where he took a weeklong series of courses on interfaith relations in 2006. One of the teachers in Singapore was a Muslim who encouraged Bok to study at the Seminary later that year.

His experience in taking courses such as “Dialogue in a World of Difference” was eye-opening, including visiting a synagogue, which he had never done before.

His article then turns to how this experience can help Malaysia with its “fractured racial and religious discourse.

He writes: Firstly, dialogue is the opposite of debate. In a debate, you try to persuade the other fellow to your point of view. It seldom happens because we all have egos, whether personal, cultural, religious or political. Like in a court of law, where there is one winner and one loser, debate in a country is finally decided at the polls where there is also one winner and one loser.

Dialogue, on the other hand, is not about persuading someone. It is about understanding the other person, why he thinks what he thinks or says what he says. Dialogue, of course, can degenerate into a debate in a politically and religiously charged atmosphere like our beloved Malaysia, especially in the peninsula.

Secondly, we all create straw men. In discourse, this means that we invent a caricature of our real opponent, then we proceed to attack and defeat him piecemeal in his absence. This is easy to do because a straw man cannot talk back. He has no life and is not real. He is a figment of our imagination, created by our prejudices.

In contrast, when we talk to a real person, he usually doesn’t fit our presuppositions. You say something about what he said, then he says “that’s not what I said.” It’s always better to talk to someone than to talk about someone, especially when it’s negative.

Thirdly, it’s extremely difficult to understand people. I have been married to one wife for over 40 years, and we still misunderstand each other. We still say to each other, sometimes with great emphasis, “that’s not what I meant!”

Some wag said, “I know you believe you understand what you think I said, but I’m not sure you realise that what you heard was not what I meant.”

Think of the barriers we have to cross. With my wife, it’s gender, race and culture. Then there’s religion, and politics, which can even split families.

See Guat Kwee from Singapore, a fellow alumnus, shared Bok’s article and passes along his best wishes to Hartford Seminary staff and faculty.