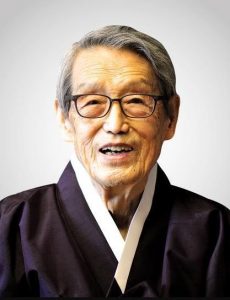 A celebrated pastor who dedicated his life to democracy in South Korea and was jailed for his activities, Moon Tong-hwan was a graduate of Hartford Seminary who earned his MA in 1956 and his Doctor of Religious Education in 1961. He died earlier this month at the age of 97.

Dr. Moon was a Christian pastor who, according to the Korea Herald, “is noted for his fight against the country’s authoritarian governments led by Rhee Syng-man and Park Chung-hee from the 1940s through the 1970s.”

Born Stephen Tongwhan Moon in 1921 in Kando, Manchuria, he attended local schools and then studied in Tokyo in the early 1940s. After returning to Manchuria to teach school, he and his family fled to Seoul, Korea, in 1946 “escaping persecution by the local Communists,” according to his biography in the Hartford Seminary archives.

In 1950, with the outbreak of the Korean Conflict, Dr. Moon served the U.S. Army as an interpreter. He came to the U.S. in 1951 and studied at Western Theological Seminary and Princeton Theological Seminary before earning his MA and Doctor of Religious Education at Hartford Seminary. His doctoral thesis was titled “First Century Christ for Twentieth Century Korean Youth.”

He later returned to South Korea, and in 1976, he was put behind bars and served a nearly two-year prison term for his pro-democracy activities. After his release from prison, Dr. Moon found political asylum in the U.S. but then returned to Korea in 1985 to lecture at Hanshin University. He was elected to the National Assembly in 1988.

Dr. Moon is survived by his wife, two sons, and two daughters.