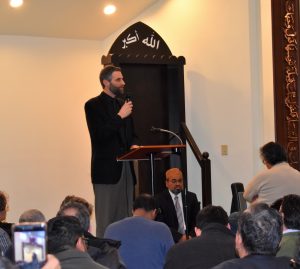 Hartford Seminary President Joel N. Lohr joined speakers of different faiths at the Islamic Association of Greater Hartford (Berlin Mosque) on Friday afternoon to express support and solidarity with Muslims after the horrific shootings at two mosques in New Zealand that left at least 49 worshipers dead.

“Where can I find words to express how troubling and tragic this is, especially when we know it’s not an isolated incident,” President Lohr said. “This is part of a larger problem of hatred at home and worldwide. It is a problem of fear of those who are different. It is something my students, faculty, and staff at the Seminary work hard every day to overcome. Hate cannot win. Peace must prevail.”

President Lohr then called upon Christians to “live up to our call to love and not hate, to live as Jesus taught us. I encourage you, if you have not already, to find a Muslim friend and not go to grave without having made one. I know from experience that finding Muslim friends will bless your life.”

Addressing those gathered at the mosque, President Lohr said his Muslim friends and neighbors have taught him what it means to welcome the stranger.

“I stand here today — as a Christian, as a servant in God’s Kingdom, as the President of Hartford Seminary, and as a husband and father — to extend my hand to you. I stand in solidarity with you and mourn with you. I want to work with you to bring peace to a world so desperately in need. We, as Christians and Muslims, those of faith and no faith, need to support each other even in our differences — perhaps most importantly because of them.”

During the Jumma prayer service that preceded the speakers, Imam Refai Arefin spoke about how crises such as the one in New Zealand strengthen the character and resolve of Muslims. “In this conflict of extremists, we can be above the fray.”

He called upon those present to “not just hate hate, but be part of the solution.”

After the prayer service, Dr. Reza Mansoor, President of the Islamic Association of Greater Hartford, Founding President of the Muslim Coalition of Connecticut, and a former Hartford Seminary Trustee, welcomed those present, both members of the mosque and those “brothers and sisters” who came to stand with them.

Dr. Mansoor said he had been receiving messages all day expressing sorrow about the tragic loss of life and expressing support for Muslim communities.

“Know that you are loved,” he told those assembled, adding that a majority of Americans do not hate or fear Muslims.

State Sen. Saud Anwar, a Hartford Seminary corporator, also announced that the Berlin Mosque would hold a press conference on Sunday at 4 p.m. with public officials who will reiterate that “an attack on one is an attack on all.” They will address the issue of making all places of worship safe, he said.

Rabbi Herb Brockman spoke of the 49 killed and said, “Their blood cries out to all of us. God’s judgment is upon us all. … We pray that God will forgive all of us for what we are doing to each other.”

Fatma Antar, a former Hartford Seminary Trustee, spoke as “a Muslim and as a mother” who was horrified by the “violent, senseless attack. … We ask God for compassion, understanding and love for each other.” 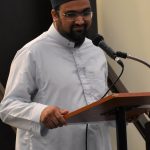 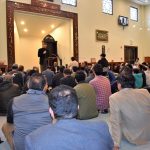 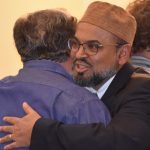 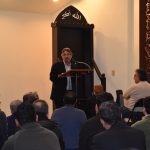 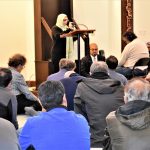