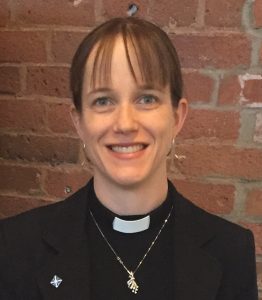 The Rev. Dr. Molly James of West Hartford has been appointed deputy executive officer of the General Convention.

A press release from the Episcopal Church Office of Public Affairs states:

The Rev. Dr. James was selected after a churchwide search during the past several months. In this new role, she will oversee parochial and diocesan reporting; coordinate with other professionals working in convention and meeting planning; work collaboratively with the deputy for legislation; and assist the executive officer in his various ministries.

Prior to this appointment, the Rev. Dr. James served on the Bishop’s staff for The Episcopal Church in Connecticut as dean of formation, helping to reimagine and administer the ordination process. She also serves as chair of the Standing Commission on Structure, Governance, Constitution and Canons. A deputy to General Convention in 2018, James chaired the Legislative Committee on Ministry. She was also a deputy at the 2015 General Convention, where she served as assistant secretary to the Legislative Committee on Governance and Structure. Ordained in 2005 by The Rt. Rev. Chilton Knudsen in her home state of Maine, the Rev. Dr. James has served as a hospital chaplain and a parish priest. She holds a Ph.D. in Theology from the University of Exeter (UK), a Master of Divinity from Yale Divinity School, and Bachelor of Arts in psychology from Tufts University.

In Connecticut, the Rev. Dr. James serves as an adjunct professor at Hartford Seminary and at the University of Saint Joseph, focusing on ethics and pastoral care. Her doctoral research With Joyful Acceptance, Maybe focused on suffering and grief and was published in 2013 by Wipf and Stock. The Rev. Dr. James has also served as co-chair of Young Clergy Women International (an ecumenical organization of clergy women under 40), and as a board member for the Society of Scholar Priests. She and her husband Reade (a mechanical engineer) live in West Hartford with their two children, Katherine and Halsted.