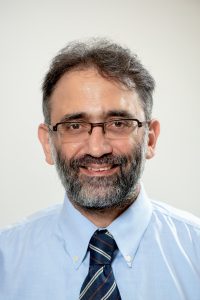 Dr. Najib George Awad, Associate Professor of Christian Theology, was recently invited to join the Board of Trustees of the Believers Without Borders (Mūʾminuwn bilā Ḥudud) Institute for Interreligious Relations and Intellectual Research based in Rabat, Morocco. The Board of Trustees is responsible for overseeing the institute’s intellectual and scholarly work, developing its strategic plan, and representing the institute at academic and scholarly events, conferences and projects.

In relation to this new responsibility, Professor Awad was invited to represent the institute and read a paper at a conference co-organized by Sorbonne University on Religion and State in Islamic Thought to be held in Paris, April 18-21. Professor Awad is going to read a paper on al-Madina Document and its study in Arab-Muslim and Western scholarship.

Professor Awad has also been commissioned to work on an interreligious project inaugurated and directed by KAICIID, a nongovernmental organization based in Vienna, Austria, that works toward fostering interreligious dialogue and intercultural interrelations in the Arab and Muslim worlds. Professor Awad will design academic syllabi on interreligious dialogue and education and will also run training workshops for teachers and educators from all the institutes and schools of theology and religious education in the Arab world. These workshops will be held in Vienna, Austria, early summer 2019.