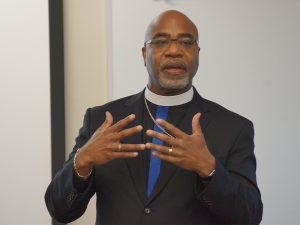 In a press release from CTS, Dr .Love Sechrest, Vice President of Academic Affairs and Dean of Faculty, said: “Dr. Tribble represents a wealth of knowledge and experience both in his work here at the Seminary and with the wider church. He is devoted to equipping leaders for the church and works tirelessly with our D.Min. and D.Ed.Min. students already, making him an obvious choice for this position.”

“Dr. Tribble began his career as an academic at Garrett-Evangelical Theological Seminary in 2000 where he served as adjunct faculty, Instructor of Congregational Ministries and Director of Teaching Parishes and Congregational Research, and Assistant Professor of Congregational Leadership and Director of the Center for the Church and the Black Experience. He has been a lecturer at Apex School of Theology in Durham, NC. He joined the faculty of Columbia Theological Seminary as Assistant Professor of Ministry in 2007, later appointed as Associate Professor of Ministry in 2012.

“Dr. Tribble’s most well-known book is Transformative Pastoral Leadership in the Black Church (2005) published by Palgrave-Macmillan Press. He was selected as one of “45 Outstanding Black Alums” by Garrett-Evangelical Theological Seminary in 2017. In 2014, Dr. Tribble received the “Frederick Douglas Award” by the International Ministers and Lay Association of The A.M.E. Zion Church. He was also a co-convener of the National Council of Churches Christian Education, Ecumenical Faith Formation, and Leadership Development Convening Table for 2016-2017.”