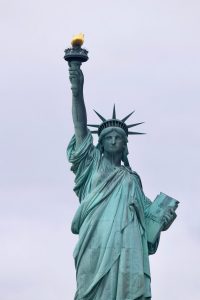 The spring semester online course Becoming Americans: Immigration and Religion in an Era of Resurgent Nationalism introduced students to the concepts, major trends, and critical issues associated with immigration in the United States. Combining historical analysis, experiential learning, and exploration of contemporary issues, the class was designed to create a learning community that lives faithfully in relationship to remembering the past, evaluating the present, and envision the future.

Students explored the historical context in the first half of the course — analyzing century-long conversations about the interplay between religion, who is allowed into the country, and what it means to be an American — before engaging in a two-day experiential learning trip to New Jersey and New York. On the trip, the students engaged in four experiences: A visit to the Elizabeth New Jersey Detention Center and meeting with Rev. Ramon Collazo, participation in the New Sanctuary Coalition’s weekly Jericho Walk and visit with Rev. Micah Bucey, a trip to Liberty and Ellis Islands, and a tour at the Tenement Museum. The experiences of the trip brought together historical and contemporary perspectives on immigration.

The first afternoon, the class met with Rev. Ramon Collazo, pastor of Iglesia Luterana Santa Isabel Lutheran Church in Elizabeth, New Jersey. Rev. Ramon shared about his ministry to detainees at the Elizabeth Detention Center and his advocacy and immigrant rights efforts. His passion and commitment—initially going through a two-year process just to receive access and permission to begin holding services at the facility—was inspiring. Rev. Ramon then led the class to meet with a Captain at the detention center, where students asked questions on the experiences of detainees and opportunities for religious life. The class then joined Rev. Ramon in a service with women detainees, where students were able to engage in conversation and prayer. In reflecting on this experience, one student shared how “it was a relief to have authentic person-to-person time with these four women. They were us. This was at once joyous and chilling to comprehend. While the detention center seems much more like a prison than the guards wanted us to believe, the women seemed much less like prisoners.” Another student remarked that watching the ministry of Rev. Ramon brought joy: “Ramon was sensational with how he could extract joyful moments out of a seemingly dire existence for these four women. He brought compassion, understanding and faith.” This was an unforgettable experience—entering the airport-type security, walking through the concrete halls, and hearing the stories of women who had been detained from 10 days to 10 months.

The next day, students experienced a whirlwind of events, starting with a meeting with Rev. Micah Bucey, Associate Pastor at Judson Memorial Church. Rev. Micah shared about the outgrowth of the New Sanctuary Coalition and the intertwining of faith, justice, and creativity in the multi-faith organization’s initiatives. The New Sanctuary Coalition has a large “accompaniment” program, in which citizen-witnesses go with immigrants to mandatory ICE check-ins and immigration court hearings. They also provide legal support and referrals and assist with asylum applications. Each Thursday at 11:00am, religious leaders and community members march in silence and prayer around the 26 Federal Plaza building. Rev. Micah described this weekly event as the ritual that undergirds the broader work of the Coalition. The class joined Rev. Micah and others in this ritual, described by students as “an action with an immense spiritual impact” where “walking around this formidable building 7 times, praying and letting loose at the end was meditative and liberating.” One student remarked that in joining the marchers “we had the opportunity to bring our faith, our love, and our will for justice. The Jericho Walk for me was more of a still and silent experience. The slow processional around the building provided an opportunity for me to think of the different anxieties immigrants may experience as they desire and seek to stay in America.” 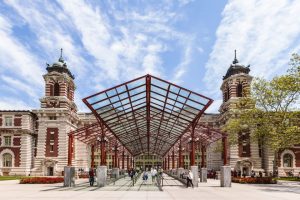 The class then visited Liberty and Ellis Islands before concluding with a tour at the Tenement Museum, which brought to life some of the historical components of the course. One student remarked, “It’s like looking at a picture in black and white and now I see color.” These experiences allowed students to question some of the myths Americans tell ourselves about our past and immigrant identities, to consider the experiences of their own ancestors, and to explore intersections in racial and religious discriminations at different points in United States history. As one student explains, Liberty Island and our time at Ellis Island caused me to think about how my Irish Catholic relatives must have felt coming through New York. It also reminded me about how they were treated once they came to shore, potentially segregated and ostracized due to their religious beliefs and practices. As related above perhaps a strong and viable multi-faith effort can help stem the tide of ethnic bias and discrimination.” Additionally, the Tenement Museum tour explored the experiences of three families who lived in the building in the 1950s-1970s, including a Jewish refugee family, a Puerto Rican family, and a Chinese immigrant family, providing a glimpse into the changing realities with the opening of America’s doors to newcomers after the 1965 Hart-Celler Act. Students reflected on this experience, in that it “brought to life the human stories within our studies. We were able to touch, hear and feel what had otherwise largely been confined to our computer screens and texts. As we were able to sit in the spaces of the Jewish family, the Hispanic family and the Asian family something amazing came alive.”

The second half of the course covers salient issues such as border policing and security, undocumented immigrants and immigrant rights, refugees and asylees, and the responses of religious communities through in-depth case studies.