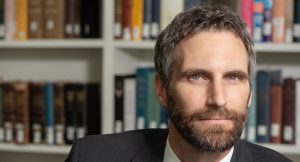 Hartford Seminary’s new President, Dr. Joel N. Lohr, is the subject of a two-page article in the April issue of Hartford magazine.

The article, “In Our Midst: Hartford Seminary’s Unexpected Leader,” introduces President Lohr to the Greater Hartford community with an anecdote about his previous career in construction management. Written by Rand Richards Cooper, the article also talks about how President Lohr’s life has led up to the job of running this very special interfaith institution.

Cooper writes: “The act of reaching across faith lines helped Lohr find his own way theologically. He was raised in a Reformed Christian tradition, and while working on his doctoral dissertation he found himself wrestling with the Calvinist doctrine of election — the idea that God divinely chooses some individuals and not others. To his surprise, his doctoral adviser suggested that he read the medieval rabbi, Rashi. That led him to an array of Jewish scriptural commentators, both classical and contemporary. ‘They brought me into the same Scriptures with a new light, and helped me challenge my own tradition in an intelligent way.’ That same productive challenge animates the interfaith education offered at Hartford Seminary, whose motto is ‘Exploring Differences, Deepening Faith.’