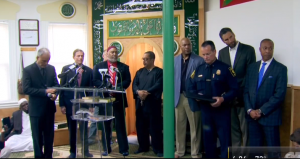 President Joel N. Lohr was among public officials and religious leaders who showed their support on Friday for the Muhammad Islamic Center of Greater Hartford, which received a violent and racist threat last month. State Sen. Saud Anwar of East Hartford organized the gathering, which was held on a day that marked both Good Friday and the start of Passover.

“I stand here on a holy day,” President Lohr told the gathering. “I think there was no better way to spend a day like this than with you, and I think it’s where Jesus wants me to be today.”

The threat against the Islamic Center was made on March 24, a little more than a week after 50 people were killed at two mosques in Christchurch, New Zealand, by a man who professed hatred for Muslims.

While police said they believe they know the identity of the person making the threat in Hartford, they have not yet revealed it because the investigation is ongoing. Members of the mosque, according to press reports, have had to increase security and some families have withdrawn their children from religious school there.

To read more and watch news coverage of this event, visit NBC-30 or the Journal Inquirer.