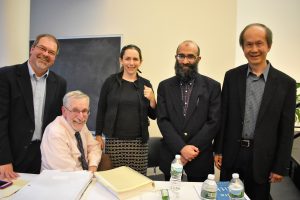 A symposium on “Jewish, Christian and Muslim Perspectives on the Language of Scripture” drew a large crowd to Hartford Seminary on April 1 to hear from four scholars on the topic.

Professor Deena Grant, Associate Professor of Jewish Studies at Hartford Seminary, gave an overview of the evening by saying that “language expresses the ideas of scripture and influences how we perceive scripture.”

Four presentations followed, starting with “Faith, Belief, and a Compassionate Response: What it Means to be a Neighbor” from Father Dr. Joseph Cheah of the University of Saint Joseph.

Father Cheah spoke about how the word “compassion” comes from the Hebrew word, rehem, which means a mother’s womb. To be compassionate is to have a deep feeling a woman has for the child that comes forth from her womb. In the parable of the Good Samaritan, it was the good Samaritan who exemplified this sort of compassion by offering liberating assistance to the half-dead man on the side of the road. Using Harvey Cox’s thesis of the primacy of faith over belief, Father Cheah examined what this good Samaritan, a foreigner and a racialized other, teaches us about what it means to be neighbor and exemplifies for us the value of strangers in our midst.

Dr. Steven Blackburn, recently retired from Hartford Seminary, then spoke about “The Book of Job, Islamic Thought and the Gospels.”

He described how a rising tide of Islamization began to engulf both Jews and Christians in Mesopotamia by the mid 8th century C.E. At that time, interpreters of Jewish scripture presented their writings in ways that were accessible to Muslims through preferences for vocabulary with an Qur’anic cast. The translation of Pethion ibn Ayyub of the Book of Job betrays not only affinities to Islamic thought but simultaneously attempts to harmonize Job’s teaching with portions of the Gospels.

Professor Grant followed with an exercise she called “Exploring Jewish and Christian Translations of Scripture: Practical Applications.” Participants viewed a number of identical scriptural passages in Hebrew and discussed how translation into English or other languages can influence meaning.

Dr. Suheil Laher, Adjunct Professor at Hartford Seminary, wrapped up the evening with his presentation titled, “Does Everyone in Heaven Speak Arabic?”

The Qur’an is central to Islamic belief and practice, as God’s words. But what exactly is meant by the phrase, “God’s words.” Is Arabic “the language of God”? And if so, how much leeway is there for prayer and sermons to be in other languages? Will everyone in Heaven speak Arabic? Dr. Laher discussed these theological and ritual questions, and how they impacted and were impacted by socio-political factors.

View the entire presentation below: