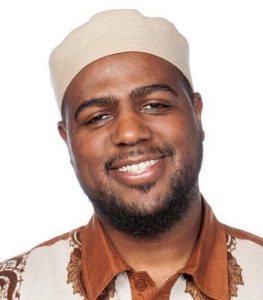 President Joel N. Lohr and Hartford Seminary are thrilled to announce that Dr. Bilal W. Ansari, a 2011 graduate of the Seminary’s Islamic Chaplaincy Program, will return to co-direct the program, the first of its kind in the United States and the continued leader in a growing field. He has also been appointed Faculty Associate in Muslim Pastoral Theology.

Dr. Ansari currently serves as Director of Campus Engagement for the Office of Institutional Diversity and Equity at Williams College in Williamstown, MA, a role he will continue to play through a joint agreement with Williams. Dr. Ansari will join the faculty of the Macdonald Center for the Study of Islam and Christian-Muslim Relations as part of his position at Hartford Seminary, which begins on July 1.

“Dr. Ansari brings a unique skill set to this position, the Islamic Chaplaincy Program, the Seminary, and our faculty,” Interim Academic Dean David D. Grafton said. “He has a wonderful mix of both practical experience as a chaplain in various settings and the teaching experience as an important and cutting-edge American Muslim theologian. We look forward to exciting ventures with him as part of the Macdonald Center and the Chaplaincy program of Hartford Seminary.”

As co-director, Dr. Ansari will join Dr. Timur Yuskaev, Associate Professor of Contemporary Islam and Co-Editor of The Muslim World journal, in running the premiere program in the country for training Muslim chaplains.

Hartford Seminary launched the Islamic Chaplaincy Program in 2001, and for many years, it was the only accredited such program in the country. The 72-credit degree, which includes a Master of Arts in Religious Studies and a Graduate Certificate in Islamic Chaplaincy, is officially a Master of Divinity (M.Div.) equivalent degree according to the Association of Theological Schools, one of the Seminary’s accrediting bodies.

“God is the best of planners,” Dr. Yuskaev said. “And Dr. Ansari’s return – to lead the program from which he graduated eight years ago, and to make Harford Seminary the home of the new and groundbreaking field of study, Muslim Pastoral Theology – is nothing short of providential.”

Dr. Ingrid Mattson, the London and Windsor Community Chair in Islamic Studies at Huron University College at Western University in Canada and a prominent leader in the Muslim community, was the founding director of the Islamic Chaplaincy Program at Hartford Seminary and taught Dr. Ansari when she directed it. In recommending Dr. Ansari for the position, she called him a person of great integrity with a deep commitment to education, to the faith community, and to social justice.

“Bilal has worked and collaborated successfully with diverse American Muslim communities [and] Bilal is a wonderful male ally to women in the faith community,” she said. “There is much more I can say about Bilal, but I will end with the reason why Bilal is particularly suited to fill the role of Director of Islamic Chaplaincy. Bilal has worked as a chaplain in three of the main institutional settings for chaplains in America: corrections, health care, and education. His many years of practical experience, combined with his education and training, makes him one of the most knowledgeable and experienced Muslim chaplains in the country.”

Dr. Ansari spent 16 years working as a prison chaplain and community organizer, focusing on inequities in race, gender and religion. He has been named to the list of top 100 American Muslim social justice leaders.

A first-generation college student, Dr. Ansari earned a Bachelor of Science degree in Human Services from Springfield College, and a Master of Arts in Islamic Studies and Christian-Muslim Relations as well as a Graduate Certificate in Islamic Chaplaincy from Hartford Seminary.

From 2011 to 2014, he served as the Muslim chaplain for Williams College and Assistant Director at the college’s Center for Learning in Action.

Before returning to Williams in 2017, Dr. Ansari served as Dean of Student Services and Director of Student Life at Zaytuna College in Berkeley, CA. While there, Dr. Ansari began doctoral studies at the Pacific School of Religion, which he completed this year.

“Hartford Seminary is the place where I began to reflect deeply about pastoral theology as it relates to my ministry as a Muslim chaplain,” Dr. Ansari said. “It is the place where Jewish, Christian and Muslim scholar-activists scripturally challenged and spiritually developed my passion for social justice. Now, it is the place where God has honored me to return and teach Muslim Pastoral Theology as a scholar-practitioner. I am excited to have the opportunity to develop tomorrow’s religious leaders among caring staff and talented faculty. All those called to ethical leadership and social justice work, I have returned to tell you Hartford Seminary is the place to learn to discern and respond to the voice of God.”