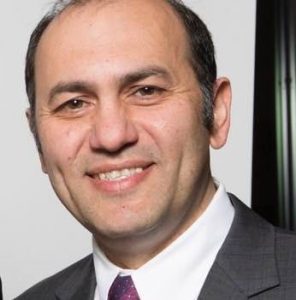 President Joel N. Lohr and Hartford Seminary are pleased to announce that, as of July 1, Dr. Hossein Kamaly will hold the Imam Ali Chair for Shi’i Studies and Dialogue among Islamic Legal Schools. He will also be Associate Professor of Islamic Studies.

The chair, established in 2015, is the first dedicated to Shi’i Studies in North America. Its mission is to provide a voice in the academy for Shi’i Islam, as well as encouraging dialogue among Islamic schools of thought and practice, including Shi’i and Sunni law. Hartford Seminary’s commitment to dialogue includes dialogue within religions as well as between them.

“I could not be more pleased that we have attracted a scholar and teacher of such high repute,” President Lohr said. “But Dr. Kamaly brings more than excellent scholarship and teaching. He brings deep understanding of and love for interreligious dialogue, as well as a keen interest in helping to bring Islamic schools of thought into discussion with each other in a way that builds bridges of peace in the world. Ours is a world in need of careful, clear thinking, and sensitive discourse. Dr. Kamaly is just the person to lead us and the country in this important work.”

Dr. Kamaly has taught in New York City for many years. He was an Assistant Professor in the Department of Asian and Middle Eastern Studies at Barnard College and Columbia University from 2007-2017. He has also taught at the City University of New York, Hunter College, and Brooklyn College.

He has a Master’s and Ph.D., both in History, from Columbia University. He is the author of two monographs, God & Man in Tehran (Columbia University Press, 2018) and the forthcoming A History of Islam in 21 Women (Oneworld Publications), as well as many journal articles in both English and Persian.

Funding for the chair’s endowment was made possible through numerous generous donors from around the world, including the Universal Muslim Association of America, the World Federation of Khoja Shia Ithna-Asheri Muslim Communities, MARC (Mulla Asghar Memorial Library & Islamic Recourse Centre), and the Mohsin and Fauzia Jaffer Foundation.

Establishing the chair was a community effort spearheaded by Dr. Mahmoud Ayoub, a renowned scholar who retired from teaching at Hartford Seminary in 2016 but remains an honorary Faculty Associate. Previous holders of the chair include Dr. Sayed Ammar Nakhjanvani and Dr. Seyfeddin Kara.

“We are thrilled with the good news of the selection of Professor Hossein Kamaly as holder of the Imam Ali Chair for Shi’i Studies and Dialogue among Islamic Schools of Thought at Hartford Seminary. We sincerely pray and do hope that Professor Kamaly, along with his respected colleagues and students, will contribute to a much higher level of intra- and interreligious understanding in support of truth, justice, and peace for all.”

Dr. Kamaly said he is honored and humbled by the trust placed in him.

“I look forward to joining esteemed colleagues at the Hartford Seminary, in fostering academic excellence and community service.”