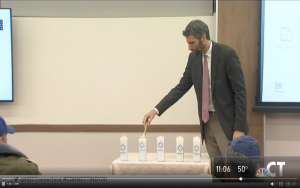 Community members and leaders of different faiths gathered at the Jewish Community Center in West Hartford on Thursday night following last weekend’s fatal shooting at a synagogue in Poway, CA.

Hartford Seminary President Joel N. Lohr participated in the vigil, coverage of which can be found on NBC Connecticut and on Fox 61 News. Part of his media interview can be seen on the Fox 61 video.

In response to the shooting by a 19-year-old who attended an Orthodox Presbyterian Church, President Lohr had these words:

“As a Christian, I recognize that this event in particular brings out an ugly history for us. If the reports of the suspected Poway Synagogue shooter are true, it seems he was a churchgoer in what might be considered a traditional or evangelical church denomination, one probably not that different from which I grew up in. It’s too early to draw conclusions, but I can’t help but ask questions, questions as a Christian and as a scholar of Jewish-Christian relations and biblical interpretation. I humbly call on my fellow Christians to give all of this heartfelt reflection and honest examination. We can no longer skirt how our teachings and lived realities may feed into hurt, hatred, and fear of the other, especially the Jewish people. Indeed—and I shudder to say it—we need to ask ourselves how our teachings have and might still lead to violence and killing. If we expect members of other religious communities to critique the parts of their traditions that have been used to justify violence against others, we need to be equally willing to examine the darker places in our own tradition, with an unblinking eye.”