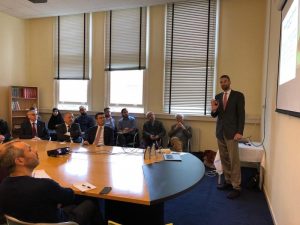 President Joel N. Lohr recently returned from a 10-day visit to Europe that began at the Islamic University of Rotterdam (IUR), one of Hartford Seminary’s educational partners.

IUR, a graduate and undergraduate institution, collaborates with Hartford Seminary through Erasmus, a European Union funded program that involves student and staff exchanges. During his visit, President Lohr gave a lecture titled: A History of Hartford Seminary: Christians and Muslims in Abrahamic Perspective.

He then traveled to Amsterdam, where he met with Lady Paula R. Mandalika, a 2010 alumna of the Seminary’s International Peacemaking and Women’s Leadership Institute programs. Ms. Mandalika is currently a Ph.D. student at the Free University of Amsterdam, and she also works for the translation department of the Indonesian Bible Society.

President Lohr departed Amsterdam for Cambridge, UK, to meet with leaders at the Woolf Institute, including its Director of Studies, Dr. Emma Harris, and Director of Research, Dr. Esther-Miriam Wagner. He then traveled north to Durham to meet with Dr. Seyfeddin Kara, the Seminary’s current holder of the Imam Ali Chair for Shi’i Studies and Dialogue among Islamic Legal Schools.

Finally, President Lohr traveled to Dublin, Ireland, where he met with alumnus Gugun Gumilar, who graduated from Hartford Seminary in 2015 with an MA in Religious Studies focusing on Islamic Studies and Christian-Muslim Relations. Gumilar is in a Ph.D. program at Dublin City University (DCU) furthering his studies of Muslim-Christian Dialogue, with a focus on Indonesia. While at DCU, President Lohr met with leaders of the Centre for Interreligious Dialogue. 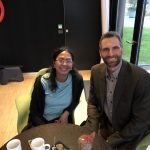 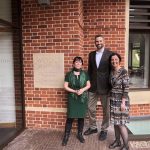 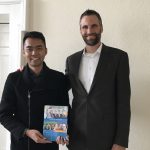