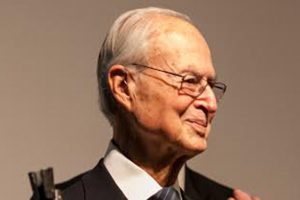 After a life of extraordinary accomplishment and service, Rabbi Stanley Kessler, a Hartford Seminary Trustee from 1994 to 1997, passed away on May 30, 2019, at the age of 95.

Known as the founding spiritual leader of Beth El Temple in West Hartford who served there for 38 years, he was also a civil rights advocate who marched with Dr. Martin Luther King Jr. during the 1960s, an activist who spoke against the Vietnam War, and a founder of Rabbis for Human Rights.

Stanley Kessler was born in 1923 in Bethlehem, PA. “After his baccalaureate degree (Yeshiva University), Stanley Kessler followed the call to arms in WWII, by joining the Air Force, flying 18 missions in a Liberator bomber over Italy and Austria,” according to his obituary.

After the war, he was ordained as a Rabbi at the Jewish Theological Seminary, and after serving several other congregations, settled in West Hartford at Beth El with his wife Maurine in 1954. In the 1960s, he responded to Dr. King’s call and became a Freedom Rider, marching with King in Birmingham and Selma, AL.

“Over the course of his long and distinguished career he continued to speak his mind on a wide range of issues from Middle East peace to human rights,” his obituary said. “He won numerous awards from organizations such as T’ruah and served in high-level positions in several national organizations, including chairman of the National Rabbinic Cabinet of the United Jewish Appeal.”

The vestry at Beth El Temple was named after Rabbi Kessler in 2003 as the synagogue marked its 50th anniversary. He also received the Lifetime Achievement Award from T’ruah: The Rabbinic Call for Human Rights. For more information on his accomplishments, visit this article in the Connecticut Jewish Ledger.

Hartford Seminary is grateful for Rabbi Kessler’s years of service on the Board of Trustees and sends sympathy to his surviving children, Dr. Abigail K. Hanna and Jonathan J. Kessler; a granddaughter, Georgine Hoge; a brother and sister-in-law, Arnold and Naomi Kessler; and numerous nephews and nieces.