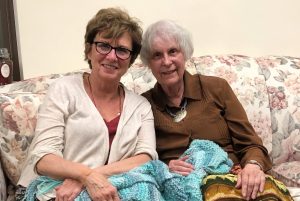 It was more than 20 years ago, but Janet Bristow well remembers meeting a woman in her Women’s Leadership Institute (WLI) class who had a Mexican serape that she used to comfort herself as her husband was dying. Both were part of the first WLI cohort launched by Professor Miriam Therese Winter, who still runs the program.

Inspired by their classmate, Bristow and another class member, Victoria Galo, decided they would knit shawls for people in their lives to give comfort and live out their faith, praying as they knitted and crocheted. No sooner did they start making the shawls than others began asking for information and patterns. Before long, they had a website. Then an article in the Hartford Courant about their ministry through prayer shawls got picked up on the wires, the way information went viral before the Internet reached into every home.

“It jumped across the ocean,” Bristow said during a recent visit to Hartford Seminary to talk about the ministry. They heard from people across the U.S. and around the world who wanted to put prayer shawl groups together.

After the attacks of Sept. 11, 2001, the demand was even higher. “That’s where it got really crazy. Everyone was in such distress,” 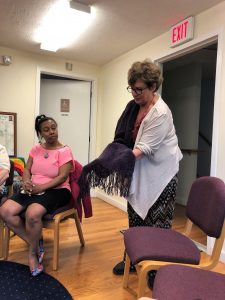 she said. “Churches flew us in to get groups up and running.”

Soon they were publishing books with patterns and inspirational stories as well as prayers. The shawls most often went to those who were ill or in mourning, but later came to include celebrations such as having a baby. “There are so many areas of need where a shawl is appropriate, when you have no words to give to somebody,” she said.

Often, Bristow hears stories about how a shawl helped someone to heal. One woman, for example, had lost a son.  The shawl was the one thing that could console her as she put her fingers into the stitches for security. Another woman couldn’t leave the house unless she had the shawl around her.

Prayer shawl ministry groups are all over the world now, too many to count. “It’s beyond anything we might have imagined,” she said, tracing the whole initiative back to the experience she had at WLI.

“It was that collective energy that I experienced in those weekends,” she said. “Everyone is so filled at the end. That energy made this go forward.”