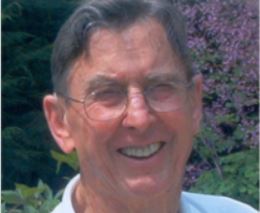 Riege, who lived in Bloomfield, was a lawyer who was involved in numerous organizations in the Hartford area, including Hartford Seminary, Asylum Hill Congregational Church, and Riverfront Recapture, which he helped to found.

Riege was elected Chair of the Hartford Seminary Board of Trustees, in part because, as a lawyer, he would be able to assist the Seminary in negotiating a proposed merger with the University of Connecticut. But in 1971, the Connecticut legislature declined to appropriate the funds requested, and the merger was off.

The board, under Riege, voted in 1972 to pursue a continuing education focus called “Mission to Ministry” while maintaining the Seminary’s strong Islamics department.

“[Jack] moved into immediate action to redirect the Seminary into a new and innovative focus that would then be implemented in two years,” said David E.A. Carson, another former chair of the Seminary’s Board of Trustees.

Reige served on the Seminary’s President’s Council from its founding in 1997 until this year. He was also a major donor to two endowed lecture funds.

His complete obituary can be found at this link.

Our deep sympathy and prayers go out to the Riege family.