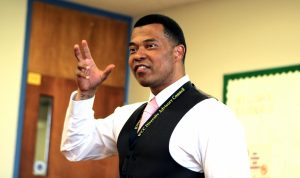 SHELTON, WASHINGTON – Malik Shakoor (pronounced MAL-ick SHA-coor) walks across the prison yard at Washington Corrections Center (WCC) and with a wide grin, he shakes the hand of everyone he meets.

In May, Shakoor began work at WCC as its new religious coordinator. He’s also the prison’s first African-American religious coordinator who is also a Muslim. But his passion for having a positive influence in others’ lives — both inside and outside a religious setting — is what guides his work.

Shakoor didn’t always want to be a chaplain. Even when a pastor at his mother’s church told him at the age of seven he would one day become a pastor. His childhood dream was to become a professional basketball player in the NBA. In fact, before becoming a religious coordinator, he earned a college basketball scholarship and played for the 2007 USA Athletes International (USAAI) men’s Barbados team.

It wasn’t until after completing his first bachelor’s degree and serving in the US Army and Air Force that Shakoor discovered his gift for helping people in their most vulnerable moments. The decision to shift his career path is one he doesn’t regret.

Shakoor grew up in a Christian home in an African American community in Huntsville, Alabama, in a low-income neighborhood. His father was African Methodist; his mother Presbyterian.

When Shakoor provides spiritual guidance, he often tells people about his own challenges.

Shakoor struggled in elementary school. He was in special education from the third to the fifth grade. His parents transferred Shakoor to another school on the south side of Huntsville. Despite this, Shakoor ended up flunking the seventh grade.

Peers often bullied him. And his teachers were doubtful he would even finish high school.

“It was very discouraging to get made fun of and teased,” Shakoor said, noting he was one of the only black students at his school. “When I was at home, everything was OK. And when I went there, I was called all sorts of names.”

Shakoor said the reason he didn’t drop out of school was because of his parents.

“My father’s inspiration and encouragement kept me in school,” Shakoor said. “Even though I truly didn’t understand the essence of how the application of knowledge could benefit my life and others, I did not want to let him down. In addition, seeing my mother work so hard to provide for us was something that kept me going.”

From Basketball to a Truck

While at the University of Maine, Shakoor played for the USAAI. It required lots of international travel, and he didn’t want to be away from his family for long periods of time, so he tried to get a job closer to home.

By the time he finished school in 2008, the Great Recession hit. Despite having multiple degrees, Shakoor couldn’t find steady work. He stocked retail store shelves at night and did whatever odd jobs he could muster during the day. In 2009, he became a father to his first daughter. However, work was still hard to come by, and it wasn’t enough to cover living expenses. Shakoor ended up living out of his truck for about a year while his daughter moved in with her mother and extended family.

Shakoor said this was one of the most difficult times in his life. The mounting stress from underemployment and not being able to provide enough money for his family made Shakoor do a lot of introspection. He felt lost because he felt he wasn’t where he wanted to be in life.

Around this time, Shakoor began exploring religion and discovered Islam.

“I had to do a gut check about who I wanted to be,” Shakoor said. Despite growing up around religion, he noticed a lot of discrepancies in what people said and their actions.

A cousin suggested he read the Qur’an and he fell in love with it.

“I loved the way Islam spoke to me,” Shakoor said. “It’s a way of life. I loved that it was very repetitive and there’s a strict guidance that’s to the point and it helps you react when things are going well or if things are going bad.”

By 2011, Shakoor had moved in with his parents. Things still weren’t looking up on the job front. So Shakoor decided to enlist in the US Army and served for four years. It was here where he discovered he wanted to be a chaplain.

Shakoor says an Army major — who was also a chaplain — helped solidify his decision. Shakoor met him while, stationed at Fort Hood, Texas, during what Muslims call Jumu’ah, or Friday prayer.

The Army Chaplain became Shakoor’s mentor. Shakoor says a conversation he had with his mentor helped him realize his destiny was to become a chaplain.

“We started talking about my future and something just — snap! — lit up in my head and I had this burning sensation right here,” Shakoor recalled, pointing to his heart. “All I could think about is the moment when I was seven years old and every moment that led up to this conversation with my mentor. This was my calling.”

Shakoor served in the US Army for three years as an assistant imam (or Muslim chaplain). After leaving the Army, he joined the US Air Force Reserve. Shakoor is an Air Force reservist to this day.

Shakoor would also go on to earn two master’s degrees — one in Interfaith Action and Leadership at Claremont Lincoln University at Claremont, California in 2015 — and one in Christian and Muslim Relations from Hartford Seminary in Hartford, Connecticut in 2018.

Shakoor said as a Muslim, it was important for him to become a chaplain because there are very few chaplains who are Muslim in America. For example, the U.S. Army currently has 1,433 chaplains serving on active duty. Of those, just seven are Muslim.

There aren’t many in the civilian world either. The Association of Muslim Chaplains, which supports professional development of an individual’s Muslim chaplaincy, has about 100 members, according to its membership coordinator Jaye Starr. Starr adds it’s often difficult to keep an accurate record of the number of professional chaplains who are Muslim in the US. Some have not completed full academic or clinical training and some are volunteers who may temporarily serve as chaplains to people of the Islamic faith in disaster situations.

Muslim chaplains work in a variety of settings. According to Association data, the majority work in health care (27%) followed by corrections (24%), and college settings (19%). The rest are split among various community capacities and the military.

In early 2017, Shakoor got a contract job working as an Army readiness specialist. He had two 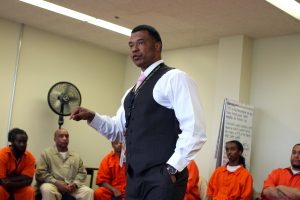 summer stints at Lackland Air Force Base in Texas in 2017, and then at the Air Force Academy in Colorado in summer of 2018. Afterwards, he continued his chaplaincy at Wesleyan University in Middleton, Connecticut. However, the government shutdown in late 2018 eliminated that position. So Shakoor started looking for other jobs to support his family.

Around this time, WCC was hiring a new religious coordinator. His wife, Kayla, encouraged Shakoor to apply so they could be closer to family. Kayla’s family is from Lacey, Washington, a city 32 miles southeast from the Shelton prison.

Shakoor did a phone interview for the position and got the job. So Shakoor, his wife and their two daughters, ages 9 and 2, moved across the country to the Pacific Northwest. He began working at WCC in May of 2019.

Shakoor says being a religious coordinator who happens to be Muslim while also having grown up in a multi-faith family helps him when it comes to interacting with a diverse prison population.

“It sets me apart, and I think it helps me in such a way that I’m more relatable to just about everybody,” Shakoor said. “I don’t push religion on anyone. I meet them where they are.”

Since Shakoor began working at WCC, he’s worked hard to create a positive environment within the facility.

He launched a peer-led mentorship program for incarcerated individuals. The program lets men who have been incarcerated for a long time serve as “mentors” to people newly-admitted to prison. The mentors are committed to changing their lives for the better. They share stories of their transformation, in hopes of curbing criminality and preventing the “mentees” from coming back to prison. Shakoor says he’s already had 10 people from the group sign up for regular counseling outside the program.

“It’s so great any time you have a staff person who recognizes the need for an injection of positivity and who embodies the words he speaks,” said Superintendent Dan White. “(Corrections) is a tough business that can take a considerable toll on our staff. It’s vital we have good recognition of that and we do everything possible to support and uplift people in a positive way.”

That’s exactly what Shakoor says he’s looking forward to as the settles in as the new religious coordinator.

“My burning desire is to impact individuals regardless of their religious, ethnic, or cultural background,” Shakoor said. “To make an impact in such a way that I plant that seed and one day I pray that they will water that seed and make it grow into something beautiful. I’m here and I’m impacting lives for the better.”

(Press release provided by the Washington State Department of Corrections)