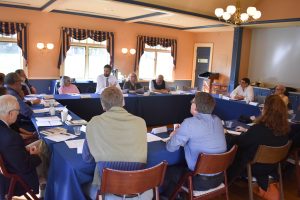 Hartford Seminary President Joel N. Lohr and Professor Hossein Kamaly were participants at a prestigious panel at Trinity College on Oct. 14 titled “Faith-Based Persuasion in the Public Square: Natural Law and Its Competitors.”

The intentionally small, by-invitation panel was organized by Professor Mark Silk, Director of the Leonard E. Greenberg Center for the Study of Religion in Public Life. It was structured as a response to the publication of Mark S. Massa’s The Structure of Theological Revolutions: How the Fight Over Birth Control Transformed American Catholicism. Each panelist formed a response to the book based on their religious expertise or theological background.

President Lohr spoke about how natural law relates to Mainline Protestantism, drawing especially from his Calvinist background, and Dr. Kamaly contributed a Muslim perspective. Massa, who was also present, responded to each panelist, which in turn promoted healthy exchanges of dialogue and discussion.

President Lohr began his remarks by outlining a Calvinist perspective on natural law and what Calvin called the sensus divinitatis. He then engaged with Massa’s idea that progress in theology is often not linear and involves disruption, asking whether protestant theology is, by nature, linked to conservatism.

Dr. Kamaly expressed his appreciation for Massa’s work, especially in this time of theological divisiveness. He then outlined how Muslims have a history of natural law discourse in their own specific vernacular, even if they do not typically use the label natural law. 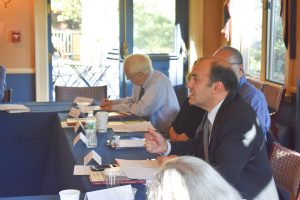