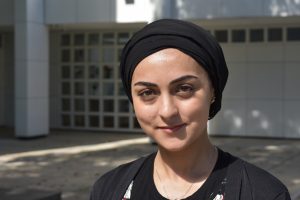 Fatima Hallal of Lebanon, who graduated from Hartford Seminary’s International Peacemaking Program in 2018, was invited to attend the recent 10th World Assembly of Religions for Peace in Germany, where she was nominated to represent the Middle East and North Africa (MENA) on the organization’s international youth committee.

The assembly, held in August, gathered about 900 religious leaders, activists, peacemakers, and youth “to draw on a common declaration with action points regarding five thematic areas: Enhancing Positive Peace, Transforming Violent Conflict, Promoting Just and Harmonious societies, Promoting Integral Human Development, and Protecting the Earth.” The goal is to address these within the coming decade.

One outcome of the Assembly was the formation of an International Youth Committee, which will govern the Religions for Peace Global Interfaith Youth Network. That network comprises 90 national chapters in six regional bodies, and Hallal was named as the representative for the Middle East and North Africa.

She writes: “As for now we are in the process of putting strategies to increase our network and identify youth leaders working on religions and peace.”

The World Assembly of Religions for Peace has been taking place since 1970 at irregular intervals around the globe. This year’s event was themed: “Caring for Our Common Future: Advancing Shared Well-Being.

Congratulations to Tima on this appointment!

If you are a Hartford Seminary alum with an update for us, please contact Susan Schoenberger at sschoenberger@hartsem.edu.