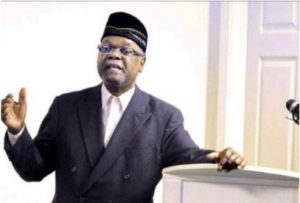 Funeral services were held on Wednesday, Nov. 6, 2019, for Imam Dr. Abdul Majid Karim Hasan, 83, a pioneer in the Muslim community both in Connecticut and across the country.

Imam Dr. Hasan began his illustrious prison ministry as the first Muslim prison chaplain in the Connecticut Department of Correction in 1975.  He became the acting Director of Correctional Chaplaincy and opened the field of professional correctional chaplaincy to dozens in Connecticut.

Imam Dr. Hasan was the longest standing founder and imam of the Muslim religious community in New Haven and Hamden, serving for nearly 50 years. Imam Hasan became Dr. Hasan as he pursued, and encouraged other Muslim chaplains to pursue,  education to be leaders in the field of chaplaincy.

Dr. Bilal Ansari, Co-Director of Hartford Seminary’s Islamic Chaplaincy Program, said: “Imam Dr. Hasan allowed me to grow as a young minister in the masjid teaching and preaching under his guidance. He then inspired me to work under his guidance in the New Haven prison from 1997 to 1999. Imam Dr. Hasan is central to my pastoral formation as a minister and I learned administrative diplomacy and how character reformation is the best form of pastoral counseling. It was Imam Dr. Hasan who introduced me to academic pursuit at Hartford Seminary, and he was so proud to call me Dr. Bilal Ansari. May God bless, Connecticut’s founding Imam Dr. Abdul Majid Kareem Hasan.”

One of 13 children, Imam Dr. Hasan was educated in Hartford public schools and served in the U.S. Air Force. He earned his BS from New Hampshire College and pursued a Doctorate in Education at the University of Massachusetts at Amherst.

He was the resident imam of the Abdul-Majid Karim Hasan Islamic Center — a mosque named after him in 2009 — and Director of Education for the Clara Muhammad School in Hamden, CT. He is the author of the book Reflections on the Islamic Teachings of Imam W. Deen Mohammed.

His full obituary can be read here.

Condolences may be expressed at www.colonialfunerals.com