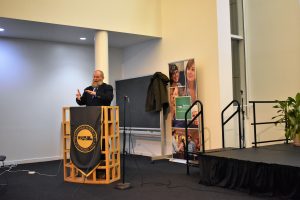 After following in the footsteps of the famous Moroccan traveler Ibn Battûta on a recent trip to Africa, Professor Emeritus Yahya Michot brought his audience along with him, showing slides and videos of an often overlooked region of the pre-modern Islamic world.

Ibn Battûta traveled extensively (“compared to him, Marco Polo didn’t go that far”), but Professor Michot said Ibn Battûta’s journeys along the East Coast of Africa have largely been ignored. That’s why Professor Michot found it so enriching to visit Kilwa, an East African city now in the southern part of Tanzania, and to view the remains of the architecture left from a vibrant sultanate that existed when Ibn Battûta traveled there in 1329.

At the time when Ibn Battûta made his journey to Kilwa, traveling by sea, Muslim traders controlled the ports and the trade around the Indian Ocean, Professor Michot said. The conditions on the ships would have been “appalling,” he said, but Ibn Battûta risked them to benefit from the generosity of the Sultan of Kilwa.

Professor Michot visited the “wonderful ruins” of the Great Mosque of Kilwa, where Ibn Battûta might have prayed, as well as a palace that would have existed at that time.

After the Portuguese found their way around the Cape of Good Hope in the 16th century, looking for a sea route to the Indian Ocean, Kilwa  and other such cities were quickly taken over and sometimes destroyed.

The full lecture can be viewed here: