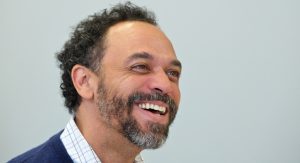 For a decade, Khalil Abdullah, MA ’19, worked as the manager of a Starbucks and a regional trainer for Barnes and Noble. He devoted himself to coffee and customer service, calling it his ministry. Through the world of coffee, Abdullah found a way he could serve, teach, and care for people. “I was a leader,” Abdullah said, “and working with something I was passionate about and drank a lot of.”

Along the way, this ministry led him to pursue further education at Hartford Seminary, where he graduated in 2019 with a Master of Arts in Religious Studies with a focus in Islamic Studies and Christian-Muslim Relations. But even before graduation, Dartmouth College hired him as its Muslim Advisor, making him one in a long line of Hartford Seminary graduates to land at the nation’s most prominent colleges and universities in a chaplaincy or advisory role.

Abdullah was born to a Christian, bi-racial family in Texas, only a few years after interracial marriage was legal in the United States. As a mixed-race child, he had the foundation to push the boundaries of social norms. “I’ve always carried that with me,” he said, “that I could be different.”

In the early 1990s, rappers such as Ice Cube and Busta Rhymes spoke about their own conversion to Islam through lyrics in their songs. “There was a political component, an idea and conversation around race, politics, and religion that made any spiritual journey as a teenager a very accessible thing.” When he was a sophomore in college, Abdullah converted to Islam. From there, he was involved with many mosques, and belonged to an African American Muslim community associated with Imam W.D. Mohammed. Abdullah worked as a school teacher in both public and private schools in Texas and Georgia before working for Starbucks and Barnes and Noble.

After deciding to pursue his graduate degree, Abdullah worked at Hartford Seminary as its Major Gifts Officer, with responsibility for Islamic Giving. He recalls experiences while holding this position that exposed him to the needs of community and chaplaincy. When he traveled to Texas to introduce the Seminary’s Graduate Certificate in Muslim Community Leadership, for example, he saw the urgency for Muslim Chaplaincy in hospitals.

“The closeness of Christian and Muslim engagement made Hartford Seminary the perfect place for me.” Abdullah said,  “I was able to be at the Seminary and form relationships with people I can call friends, who are successful chaplains that are mentors to me.”

At Dartmouth College, Abdullah creates a sense of community and belonging among students, particularly Muslim students. He now also serves as an interim Multifaith Advisor. He connects with students, not only to discuss differences, but to help them create a deeper understanding of themselves. “There are moments when we can eat together, share a meal together, go to a football game, walk a trail, and spend time together.” Muslim students often feel the need to explain themselves, and Abdullah teaches students, many who haven’t know a world without 9/11, not to lose themselves in what others or the media say.

“Hartford Seminary has played a big part in that I’m able to be a certain way, speak a certain language, I can listen with empathy or sensitivity that doesn’t come with any religious label, but really goes at the core of what it means to be human.”