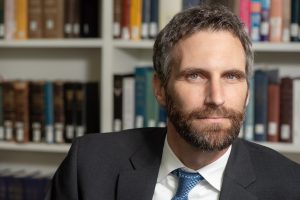 President Joel N. Lohr’s op-ed piece, “No, our work on anti-Semitism is not done — especially as Christians,” was published in the Sunday, Jan. 12, edition of The Hartford Courant.

President Lohr wrote the piece as a response to a number of recent attacks against Jews in New Jersey and New York. The two most prominent were the fatal shootings of three Jews in a kosher market in New Jersey in early December, and the invasion of a rabbi’s home in Monsey, N.Y., on the seventh night of Hannukah during which five Jews were stabbed.

“Though details about the perpetrators in all of these events are still emerging, and so drawing conclusions is premature, these utterly tragic, awful, sickening events — and let’s call them what they are: Evil, with a capital E — should not be surprising for Christians.

“For Christians, our long history is closely bound up in supersessionism — think “replacement theology” — of the Jewish people. In this line of thinking, Christians have become the true people of God, the people God really loves — the New Israel — and typically this leaves no place for Jews, or worse yet casts Judaism as an impediment that must be overcome before God’s kingdom can arrive. In this line of thinking, Jews’ only hope is a future acceptance of Jesus as their savior — that is, becoming Christian.”

President Lohr went on to say that “few lay Christians today seem to understand that what happened in Nazi Germany is in fact part of our Christian history, something that is intrinsically linked to our own story as Christians.”

“Until we start teaching our children and our larger Christian communities that this past is specifically linked to, indeed is, our past — not the past only of others who were Nazis, but also the past of all Christians — I’m convinced our problems will not end.”

To read the entire op-ed, visit this link.