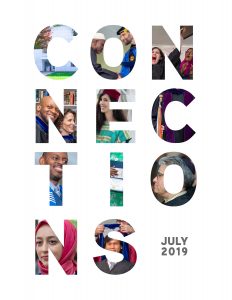 Hartford Seminary’s alumni magazine, Connections, has been honored with an Award of Excellence for a cover designed by Steven Havira, Development and Communications Associate.

The DeRose-Hinkhouse Awards are given annually by the Religion Communicator’s Council (RCC), a network of religion communicators from across the country. The awards are named to honor the late Victor DeRose and the late Paul M. Hinkhouse, leading lithographers in New York City and longtime friends of the RCC. Both men shared a strong interest in, and concern for, excellence in communications.

The award-winning design will now be in the running for “Best in Class” at the Religion Communication Congress in March in Washington, D.C.