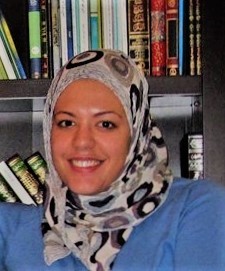 Chaplain Tricia Pethic, who earned an MA from Hartford Seminary in 2017 and a Graduate Certificate in Islamic Chaplaincy in 2019, has launched a nonprofit called Muslim Prisoner Project and serves as its CEO.

Chaplain Pethic worked as a prison chaplain in Danbury, CT, and Albion, NY, and that experience gave her the idea for Muslim Prisoner Project, started in 2017 and given nonprofit status in 2019. The organization helps Muslim prisoners in several different ways.

One is to help inmates connect with their children by providing gifts twice a year through the Eid Toy Chest program. The project also “aims to empower the inmate him/herself through providing quality Islamic literature that they would otherwise not have access to” through the Malcolm X Book Drive.

“Muslim Prisoner Project is the fruit of my experience as a former New York State prison chaplain who saw how the Muslim community was lagging behind other religious groups in their ministry to incarcerated people of their faith,” Chaplain Pethic said.

“Inmates would report to me that they would write mosques for information and assistance and often receive no reply. They also wanted a regular source of literature, similar to Loaves and Fishes and the Daily Bread which other groups publish for an inmate audience. We aim to serve not only Muslims in state and federal prisons, but also mosques that don’t have a dedicated person to respond to inmate mail or a dedicated volunteer to visit incarcerated Muslims.”

At this time Eid Toy Chest is mostly limited to New York State, but Muslim Prisoner Project fields inquiries from prison chaplains and inmates all over the country, aiming to respond to each inquiry “as best we can whether with responses to religious questions, providing books, or giving general moral support.”

The organization, the first of its kind in the country in terms of a Muslim version of Angel Tree, is endorsed by many Muslim leaders including Dr. Ingrid Mattson, Imam Zaid Shakir, and more.

The project’s annual fundraising campaign is underway at www.launchgood.com/muslimprisoner

For more information about Muslim Prisoner Project, visit this link.