Shanell T. Smith, Associate Professor of New Testament and Christian Origins, has a new book on a very personal subject.

The book is Touched: For Survivors of Sexual Assault Like Me Who Have Been Hurt by Church Folk and for Those Who Will Care (Fortress Press 2020). In it, Professor Smith tells the story of her own personal traumatic experience with sexual violence by a church leader and how it was denied, excused, and ignored.

The book is written for both survivors of sexual assault and for those to whom they turn for support and care.

Fortress Press says the book “focuses on the responses that [Smith] received from people in the church [clergy and lay folk] once she ‘sounded the alarm.’ These responses either justified, ignored, or denied that the horrific act occurred. As a survivor of sexual violence, an ordained minister, and a professor, [Professor] Smith has heard many stories from other survivors. The circumstances of the sexual assault may differ, but a common thread among them all is the fact that these stories, in one way or another, have often been ignored.

“Touched helps those who have experienced sexual assault give 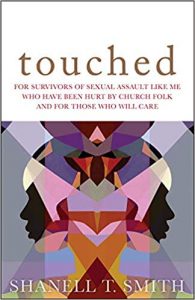 themselves permission to feel what they feel and to find strength to stand up to the counternarratives that come from those who do not understand or deny their trauma. And more, Touched helps readers learn how to respond effectively and compassionately to those who seek refuge and care.”

Thank you, Professor Smith, for taking on such a difficult topic.