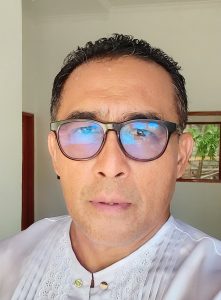 Hartford Seminary’s Board of Trustees has voted to present the Rev. Jacklevyn Frits Manuputty ’11, a graduate of Hartford Seminary’s International Peacemaking Program and its Master of Arts program, with an Honorary Doctor of Divinity degree.

The Rev. Manuputty — known to many as Jacky — was nominated by a group of fellow alumni from Indonesia. In their nomination letter, they cited the Rev. Manuputty’s work as the co-founder of the Maluku Interfaith Institution for Humanitarian Action in Indonesia, which “creates institutional capacity-building programs, develops positive public discourse, and builds a network of pluralistic conflict prevention observers.”

They go on to say: “Along with his colleagues, he has developed a peace curriculum, an interfaith peace sermon program, and a trauma-healing program. When violence flared in Indonesia in 2011, Rev. Jacky worked to form groups of youth ‘Peace Provocateurs,’ whose social media campaigns were widely recognized for their success in limiting the scope of the conflicts and preventing them from spreading.”

His peacemaking activities are almost too numerous to mention but include facilitating dialogues and promoting interfaith cooperation among many groups in the Muslim-majority country. In addition, the Rev. Manuputty works on eco-justice issues. A project named #SaveAru “forced the Indonesian government to abort its economic plan on the island,” his nominators said.

The Rev. Manuputty is nationally known as an interfaith leader in Indonesia. He was the Assistant to the Special Envoy of the President for Dialogue, Interfaith Cooperation and Civilization (2017-2019), and was elected to be the General Secretary of Council of Churches in Indonesia (2019-present).

His nominators said: “We confidently believe that Rev. Jacklevyn F. Manuputty deserves an honorary doctoral degree awarded by [Hartford Seminary] as an expression of support for Jacky’s extraordinary work. His commitment, loyalty, and humble endeavor promote values that the Seminary embodies.”

The Rev. Manuputty has received several other awards for his interreligious peacemaking work, including:

Hartford Seminary will present the Honorary Doctor of Divinity at a time to be determined.