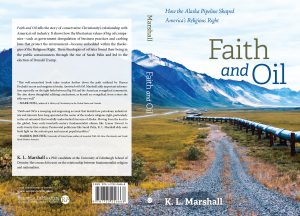 A recent graduate who is now a Ph.D. candidate abroad has a new book out from Resource Publications called Faith and Oil: How the Alaska Pipeline Shaped America’s Religious Right.

The book was written under the pen name K.L. Marshall. Due to the nature of some of the research, this recent graduate has asked Hartford Seminary not to disclose her name.

According to the publisher, “Faith and Oil tells the story of conservative Christianity’s relationship with America’s oil industry. It shows how the libertarian values of big oil companies—such as government deregulation of business practices and curbing laws that protect the environment—became embedded within the theologies of the Religious Right. These theologies of oil later found their being in the public consciousness through the rise of Sarah Palin and led to the election of Donald Trump.”

K.L. Marshall’s research focuses on the relationship between fundamentalist religion and nationalism. In a Q&A issued by the publisher, she talks about seeing frequent mentions of Alaska while doing research on the Moral Majority movement of the 1980’s. A trip to Alaska in the summer of 2019 led her to uncover connections between the religious right and the politics of the oil industry.

Faith and Oil has received two high-level endorsements, one from Darren Dochuk at the University of Notre Dame and one from Mark Noll, one of the leading scholars of American Protestantism.