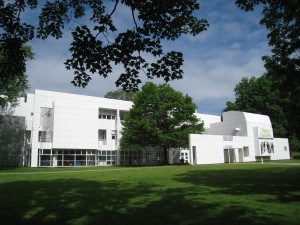 Radko S. Popov of Bulgaria was an early participant in Hartford Seminary’s International Peacemaking Program. He died in March. We are pleased to share this remembrance by one of his friends and teachers, Davide Tacchini.

He was born in town of Gorna Oryhovitsa, Bulgaria, in 1951 as the first child of Stefan Popov and Bonka Popova, who were pharmacists. He was the one of the most prominent Bulgarian Orthodox Theologian engaged in the dialogue with Islam in the last decades.

After his childhood in Varna, Bulgaria, and after completing his M.Th. from the Faculty of Orthodox Theology of the St. Cyril and Methodius University, in Veliko Tarnovo, Bulgaria, with a thesis on the Characteristics and Deeds of Jesus Christ in the Qur’an, he managed to escape from Communist Bulgaria in 1977 through a carefully prepared plan, which required several months to be completed.

From 1978 until 1980 he lived in Heidelberg, Germany, where he studied Art History. His German years have been especially important for him, since in Baden-Württemberg he met his first wife, Rachanee.

From 1980 he worked as a producer for the Bulgarian section of BBC World Service in London for 17 years, and, during this time, he had the chance to travel extensively and do research in many of the world’s top universities in the USA, Europe, and South East Asia.

After a short time being in Germany and Switzerland, he spent the academic year at Hartford Seminary in Hartford, CT, in the International Peacemaking program in 2008 and 2009.

Back to Bulgaria, he served as Managing Director of the Centre for Interreligious and Intercultural Studies in Veliko Tarnovo, and Interreligious Relations Advisor for the Bulgarian Orthodox Church.

He published a number of scholarly articles on Orthodox-Christian relations, and he is the author of over 600 radio broadcasts, mainly focused on the relationships between Christianity and Islam.  He took part in national and international conferences all over the world.

He authored or co-authored four books: Jesus Christ in the Qur’an (2010), Two Traditions, One Space: Orthodox Christians and Muslims in Dialogue (2004), The Turks in Bulgaria (2012).His last work came out just before his death (BBC Inside, 2020)

He was also a Member of the International Federation of Journalists, of ISORECEA, International Study of Religion in Central and Eastern Europe Association (www.isorecea.net/isorecea) and of the Advisory Board of Three Faiths Forum (www.threefaithsforum.org.uk).

His life was not easy, especially during his years under the Bulgarian regime. Despite what he went through, including fleeing from his home country with an unbelievably careful plan which heavily affected his life in the last year before departure, he was always a pleasant and positive person. His subtle sense of humor will be remembered by all the friends he met all over the world. An honest and reliable person will be missed by all the communities he has become part of. He was not only a good scholar but a very funny and intelligent man, who was at ease in many different contexts.

If I can share this personal memory of him. He was one of my students, but I have learnt so much more from his life experience than him from my classes. We (especially Rev. Nick and Virginia Mumejian, Rev. Jacky Manuputty and Minlib Dallh, O.P.) had a lot of fun together when we used to meet, on a weekly basis, for our drinking nights, which, frequently, spurred deep theological debates.

As a Christian, and through his personal example, he has been an inspiring figure for the many he met in his life, in different environments, context and places.

He died on March 12, 2020 after an eight-month long battle with cancer. He is survived by his only child, Stephen Popov, a sister, Antoaneta Grozeva, and his beloved wife, Bistra Boneva-Popova, who is a medical doctor.