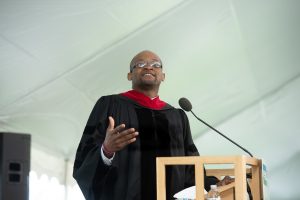 Trustee Jean Amos Lys, who earned an MA from Hartford Seminary in 2012 and graduated from its Black Ministries Program in 2008, is one of nine featured participants in “Fatherhood Manologues,” a project of The Manhood Tree initiative that’s getting widespread attention.

The “Fatherhood Manologues” project is part of an effort to “highlight the importance, value and contributions of African American fathers through their involvement and presence in their children’s lives.”

Click here to view the videos on The Manhood Tree website. You’ll see our own alum and Trustee telling a moving story about his children and his own father filmed in front of Hartford Seminary.

The “Fatherhood Manologues” was developed by Abdul-Rahmaan Muhammad, executive director of My People Clinical Services in Hartford.

The “manologues” were developed through weekly practice sessions and then filmed and edited. Storytelling coach and “Moth Champion” Christopher Rivas and theater director Godfrey Simmons coached the men through their performances.

A live performance was held at the University of Saint Joseph in February. Since then, participants have been featured on WNPR, The Hartford Courant, and during Hartford Stage’s Scene and Heard program.

The initiative is now part of a yearlong project at the University of Saint Joseph.

Thank you for sharing your story, Amos!