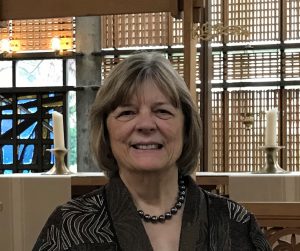 Lucinda Mosher, Faculty Associate in Interfaith Studies, is interviewed in the video below that talks about the 18-year history of the Building Bridges Seminar, which brings together Christian and Muslim scholars for intensive study each year.

Dr. Mosher followed the seminar from its beginning in 2002 “lecturing about it, writing about it, using the materials the resources it generates in my teaching.”

In 2011, she was invited to become a participant, and in 2012, she was hired as its rapporteur, a job she has held since.

“It is such an honor and joy to be involved with this initiative. I think that this new mini-documentary, just released, does a good job of conveying why I find it so special.”

Participation in the seminar, which is hosted by the Berkley Center for Religion, Peace, and World Affairs at Georgetown University, is by invitation only. Dr. Najib George Awad, Professor of Christian Theology & Eastern Christian Thought, has also participated several times.