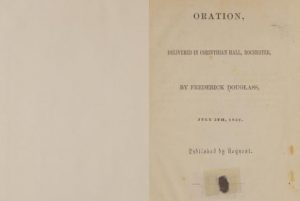 An important first edition pamphlet of a Frederick Douglass speech once owned by Hartford Seminary has been donated to the Enoch Pratt Free Library in Baltimore, where it will be preserved as a piece of American history.

In 2012, Hartford Seminary provided Better World Books with the rare copy of Douglass’s famous oration delivered on July 5, 1852. On that date, Douglass — who was the first African American to be nominated for president in the United States — delivered a historic speech about slavery and racism in America.

According to a press release from Better World Books:

“Because of the historical import of the oration, and with few additional surviving copies, Better World Books sprang into action to not only preserve this lauded piece of American history, but more importantly, to secure a permanent home for the artifact that would allow its appreciation for many years to come.

“The Enoch Pratt Free Library, fondly referred to as ‘The Pratt,’ is home to The Eddie and Sylvia Brown African American Department that supports an already-impressive collection highlighting and preserving the history and culture of the African American community.

“The Douglass oration holds a notable significance for The Pratt, as Douglass was a Maryland native with a life-long dedication to learning and access to knowledge. ‘Once you learn to read,” as Douglass, who was born into slavery and taught himself to read, famously stated, ‘you will forever be free.’  The Pratt continues to embrace and support this profound sentiment and has Douglass’s perspicuous statement etched in stone adorning the library’s entryway.”

The Internet Archive has made a scan of the complete speech available at this link.