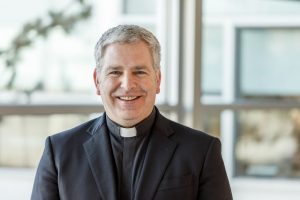 Father Dolan, who has been the school’s interim president since November, received the appointment last week.

Northwest Catholic, run by the Archdiocese of Hartford, opened in 1961. It serves students from around the Hartford region.

Father Dolan has had a long career in Connecticut, including time spent as a chaplain at both the University of Hartford and Trinity College. He has also served various parishes and as an administrator at numerous schools, both at the secondary and college level. He has been a board member at East Catholic High School, Notre Dame High school, and the Connecticut Coalition for Interfaith Understanding.

In addition to his recent studies at Hartford Seminary, Father Dolan is a graduate of Assumption College. He has a Master’s of Divinity from St. John’s Seminary and has studied at the Aquinas Institute in St. Louise and at New York University.