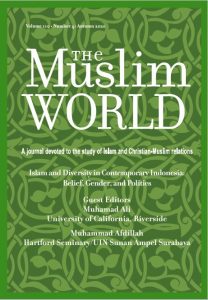 Muhammad Afdillah, a candidate for the Ph.D. in Islamic Studies and Christian-Muslim Relations, helped edit a special issue of The Muslim World on Indonesia, his home country.

“Islam and Diversity in Contemporary Indonesia: Belief, Gender, and Politics” was published in fall 2020.

“As an intern at The Muslim World, I have been working on this issue with Dr. Muhamad Ali (University of California, Riverside) since the end of fall 2017,” Afdillah said. “We invited scholars from the U.S., Indonesia, and Japan to write on various topics related to Indonesian Muslims and their relations with the Other.”

The issue includes one of Afdillah’s own papers, “The Politics of Interreligious Dialogue in Indonesia: An Analysis of the Ulama’s Anti-Kristenisasi Fatwas and Their Challenge to the Government’s Interreligious Harmony Project.”

It was a paper he originally wrote for Academic Dean David D. Grafton’s class in spring 2018 and then presented at the 19th Northeastern Conference (NEC) on Indonesia at Yale University in 2019.

“Overall, the process of publishing The Muslim World’s special issue on this topic — from writing proposals, to inviting scholars to write for this volume, editing the articles, and eventually publishing them — was a very good experience for me. It also helped me to improve my dissertation project on Muslim perceptions of Christianity in the post-New Order Indonesia.”