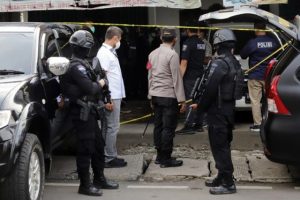 Following a deadly bombing at the door of the Makassar Cathedral Church, Sunday morning, at 10:30 local time, March 28, MA student Muhammed Saleh of Indonesia had these reflections to share.

Makassar City is the capital city of South Sulawesi Province, inhabited by urban residents from 20 surrounding regencies/cities, with a total of 9.07 million people according to the 2020 census. Makassar is known as a modern industrial city with an international airport and port, and a working population made up mostly of national and international merchants, in addition to several other professions. The population of Makassar consists of two major tribes, Buginese and Makassarnese, and of two minority tribes, Torajanese and Mandarnese.

The city of Makassar is on the map of the world, as it is on a trade route traversed and visited by international traders. Further, it is known for its high-quality and abundant agricultural products such as spices and rice. These two factors caused the Dutch and their allies, especially the Portuguese to colonize and inhabit the city of Makassar for several centuries.

Makassar has three well-known universities; Hasanuddin Makassar University (Unhas); Makassar Public University (UNEM); and Alauddin Islamic University (UIN Alauddin Makassar). Makassar has several figures and scholars who have national and international prestige. One of them is Muhammad Jusuf Kalla, former Vice President of the Republic of Indonesia (for two separate terms, 2004-2009 and 2014-2019). He is known as an inter-religious and ethnic peacemaker, having resolved conflicts in Poso, 2001, and in Maluku, 2002. He also helped end conflict between the Government and the Free Aceh Movement (Gerakan Aceh Merdeka), 2005.

Makassar has long been inhabited by followers of several major religions such as Islam, Christianity, Hinduism, Buddhism and Confucianism. They live in peace and harmony. Makassar is the most modern city in Eastern Indonesia, known as the gateway to the Eastern Archipelago.

In the last few decades, Makassar, like other cities/districts throughout Indonesia, has not escaped the influence of radical and terrorist groups, which use the city as their destination for escape, network development, and hiding place for followers. These are better known as the Jihadist groups, people who feel bound to uphold the caliphate and rejects the legitimacy of the legitimate government, by means of terror and suicide. Most of the Jihadists have been arrested and dozens have been shot dead for resisting police officers.

As far as I can remember, there were two cases of terrorist bombs that exploded in Makassar. They were very detrimental to the good name and greatness of the city of Makassar. First, in 2002 there was a bombing in fast food restaurants, McDonald’s, malls; and second, last week, Sunday morning, at the door of the Cathedral Church. The 2002 bombing killed three people and injured 11 people. As for the bombing yesterday, two victims were killed, the perpetrators, a husband and wife, who were still young, 26 years old; and dozens of people were injured as a result of the bomb fragments. The bomb was suspected to have high explosive power and was carried by inexperienced terrorists on motorbikes.

In the hours after the bomb blast in Makassar, our President, officials and local, regional and national leaders, leaders of religious organizations and social organizations have simultaneously strongly condemned this act and asked the police to immediately arrest and expose the radicalism and terrorism network in Makassar.

I am interested in quoting the statement of our President, Joko Widodo: “I strongly condemn this act of terrorism and I have commanded the Police Chief to thoroughly investigate the perpetrators and expose his network to its roots. The entire state apparatus will not tolerate acts of terrorism like this and I ask the public to remain calm in carrying out their worship because the State guarantees the security of religious people to worship without fear…”

I am a local son who was born in Sidrap Regency, a neighbor of the city of Makassar, and graduated from the senior high school and university in Makassar, so I also feel how this violent act has damaged the good name and reputation of Makassar. I imagine how difficult it will be for the local government and all stakeholders to rebuild the good name of Makassar. Investors and tourists will certainly experience concerns and considerations over investing and visiting tourist centers that have high historical value in Makassar.

Unlike the majority of the Indonesian population, the people who carry out terror are those who do not have a sense of humanity. They are people who have wrongly chosen teachers, friends, and the community in learning religious studies. They have failed to understand the core and spirit of their religions, which teaches peace-love. They are willing to kill themselves and others in the hope of going to heaven. That view is a form of wrong and shows a fatal understanding of their religion’s teaching.

I believe that there is no religion in this world that teaches hatred and enmity toward people simply because we have different ways of understanding a religion. The number of people who have been caught up in groups of radicalism and terrorism has reached enormous numbers and worries those who want to live in peace with love. The two main factors that foster the notion of radicalism and terrorism in Indonesia are domestic and global. From domestic circles are those who fail to achieve justice according to their group; and from global influence are the ISIS and Al-Qaedah movements, which want to establish an Islamic or caliphate model state.

However, I am optimistic that our government, together with police officers, soldiers, educated circles, and humanitarian activists will continue to build unity, and they will mutually reduce and save our young generation from the influence of radical and extreme religious teachings.

As a student, of course I must be more enthusiastic in seeking knowledge and experience, and be actively involved in several activities, especially those related to establishing inter-religious dialogue and peace in the Hartford Seminary environment.