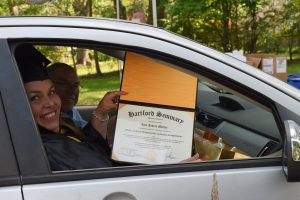 Hartford Seminary held its 2021 Graduation via webinar on Friday, May 21, but graduates were able to visit the campus later in the day for a drive-through reception.

Graduation began at 11 a.m. with an Invocation from Bishop Dr. Benjamin K. Watts, Director of the Black Ministries Program and Faculty Associate in Religion and Community Life.

After a greeting from the new Chair of the Board of Trustees, Clare Feldman, President Joel N. Lohr gave his welcome.

“Let me begin by taking a moment to congratulate you in the midst of what has been a trying time. This event would not be real if I did not recognize that your achievement today has come through a great deal of hardship — sweat, tears, and loss. I extend my sincerest sympathies to those of you who have lost loved ones to the coronavirus pandemic. I also want to acknowledge and affirm my own commitment, and the commitment of Hartford Seminary, to work every day to overcome our other pandemic of systemic racism and racial inequities in our country. May God bless our work, and the important work of you our graduates, to make this country and our world a more just and more peaceful place.”

President Lohr also introduced the main speaker, the Rev. Jacklevyn Frits Manuputty ’11, the recipient of a Hartford Seminary honorary doctorate, as “an internationally recognized interfaith leader whose work has fostered peace in Indonesia and around the world.”

The Rev. Manuputty spoke about his interfaith and conflict prevention work in Indonesia as well as about his time at Hartford Seminary, from which he graduated in 2011 with an MA in Religious Studies focusing on Christian-Muslim Relations.

“In my journey since leaving Hartford Seminary, I have found that dialogue and interfaith relations are not merely the exchange of theological discourses. Overall, I pursue it as an act of building a bridge between people of different backgrounds,” he said. “Getting this honor from Hartford Seminary has strengthened my faith and encouraged me to continue working in this way.”

After President Lohr read the citation for his honorary degree, the Rev. Manuputty accepted the award live from Indonesia.

Academic Dean David D. Grafton then led the way for the awarding of certificates and degrees, saying how difficult it was to have a second virtual graduation. “But that does not diminish your accomplishments nor our pride in you as graduates,” he said.

Bishop Dr. Watts then read the names of those receiving the Black Ministries Program certificate:

He was followed by Emerita Professor Miriam Therese Winter, Director of the Women’s Leadership Institute, who announced this year’s graduates of that program:

Dean Grafton then announced that one student had completed our Cooperative Master of Divinity Program and would be continuing her studies at Chicago Theological Seminary.

Dr. Winter, who is also director of the MA in Transformative Leadership and Spirituality, returned to present the graduates of that program:

Dean Grafton then presented the graduates of the MA in Religious Studies:

Dr. Scott Thumma, Director of the Doctor of Ministry program and Professor of Sociology of Religion, announced the names of the D.Min. graduates:

The final part of the program was dedicated to student prizes.

Rachel Bilodeau, for “Wonderin’ If I Can Write About Greed” nominated by Dr. Timur Yuskaev and Dr. Bilal Ansari;

Dr. Lucinda Mosher, Faculty Associate in Chaplaincy and Interreligious Studies and co-Director of the Master of Arts in Chaplaincy Program, then introduced former Board Chair Sanford Cloud Jr. to give the annual Celie J. Terry Prize, which is an interfaith service award.

Cloud presented the award live to Rabbi Barbara Paris, a D.Min. student who was cited for her passion for interfaith work.

“As a Doctor of Ministry student at Hartford Seminary, she soaked up every course that featured learning about other faiths and building interfaith coalitions,” he said in presenting the prize. “Not only was she a student of interfaith work, but she has made it part of her ministry.”

The Rev. Jean Amos Lys, Hartford Seminary Trustee and Chair of the Alumni Council, finished the ceremony with a closing address and prayer.

A drive-through reception was held on campus where graduates were able to receive their diplomas and greet Seminary faculty and staff.

The entire ceremony can be viewed here: 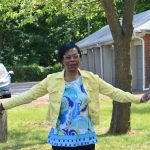 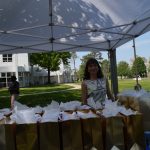 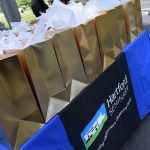 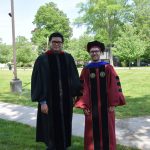 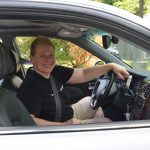 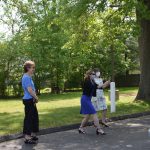 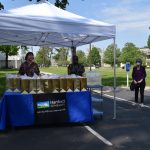 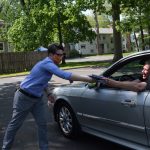 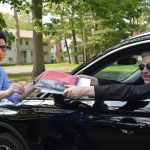 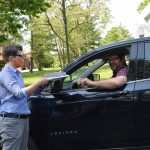 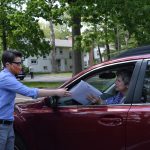 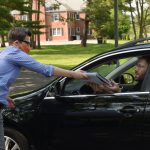 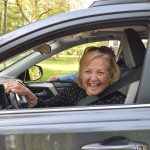 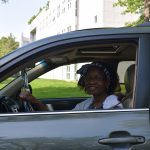 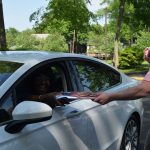 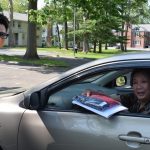 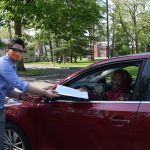 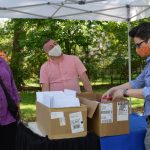 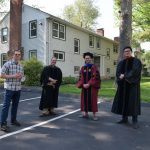 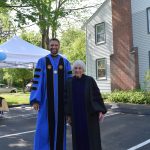 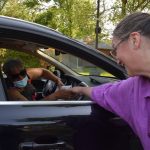 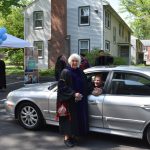 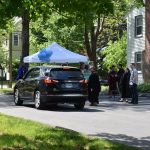 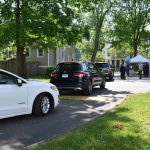 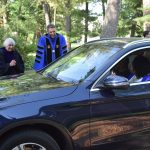 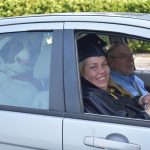 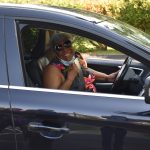