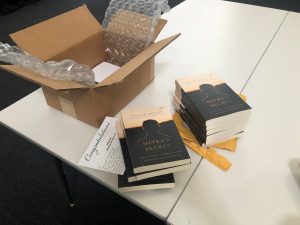 President Joel N. Lohr has written a blog post describing when he first learned about Mitka Kalinski, the subject of his latest book, who survived seven years of enslavement by a Nazi officer when he was a child.

It was President Lohr’s next-door neighbor in California who, in July 2015, shared the story about Mitka Kalinski and his wife Adrienne, who only learned about her husband’s harrowing past after 28 years of marriage.

That conversation led to a meeting with Mitka and Adrienne Kalinski, which eventually led to the book, Mitka’s Secret, being released on July 20. President Lohr is a co-author along with Steven W. Brallier and Lynn G. Beck.

“It’s hard to believe that the day has finally arrived for the book to be published,” President Lohr wrote in his blog post. “July 20 is not far away. Our advance author copies arrived this week. Holding the book in my hands feels like such a long time coming.”

To read the full blog post, visit this link.

To pre-order the book, visit this link.

Hartford Seminary will join with Voices of Hope, the Mandell JCC of Greater Hartford, the Nashville Holocaust Memorial, and the the Gordon JCC Nashville to host all three authors on Sunday, Sept. 19, at 7:30 p.m. at the Mandell JCC and via Zoom. More details and a registration link will be shared on our website and in our newsletter soon.