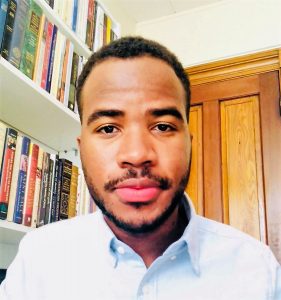 Hartford Seminary’s first modern-day Student Care and Residential Life Coordinator, Akeem Burgess, is a native of Jamaica who immigrated to the United States seven years ago. Akeem grew up in the charismatic Pentecostal tradition and attended Oral Roberts University in Oklahoma soon after arriving in the U.S.

“I started with the idea to be a science teacher, but I had to take two Bible classes,” he said. It was during his introductory Old Testament class that he realized “this is what I want to study. It was a ‘come to your senses’ moment.”

He changed his major to Biblical Literature and focused on the Hebrew Bible. He loved the academic study of languages, including Hebrew, Aramaic, and Greek. At the same time, Akeem was getting experience in student leadership as a floor chaplain and then head chaplain of a dorm that housed 158 young men.

He applied to graduate school to continue his studies and decided on Yale Divinity School, going from “high conservative” to “high progressive,” as he puts it. That whole transition left him more aware of “what’s important, and what’s not important.”

After graduating with his Master in Divinity, Akeem taught math and science for a year at St. Martin de Porres Academy in New Haven, then applied for the student care job at Hartford Seminary. During the pandemic, he spent some time thinking about what he really wanted to do and came up with two things: theological education and pastoral/student care.

In his role at Hartford Seminary, he will be trusted with the well-being of students and helping the residential students navigate their new environment. He’s more than ready to have yet another experience that will shape his thinking about religion.

Hartford Seminary’s interfaith community is “a foretaste of what is possible,” he said. “Especially now, during this great political turmoil, we are trying to aim for a utopia in some sense.”

In other job-related news:

Andrea Jones has been promoted to Academic Affairs and Administrative Assistant to the Senior Leadership Team.

Steven Havira has been promoted to Communications Manager.

Rev. Tracy Johnson Russell joins the Seminary as the temporary Coordinator for the Howard Thurman Center for Justice and Transformational Ministry.