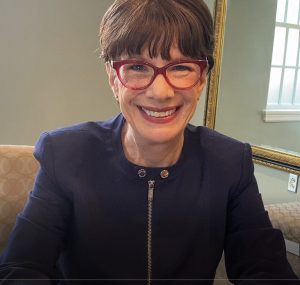 Hartford Seminary’s new distinguished professorship is named after Rabbi Stanley M. Kessler z”l (1923-2019), a friend of Hartford Seminary who served on its Board of Trustees from 1994 to 1997. The founding spiritual leader and rabbi for 38 years at Beth El Temple of West Hartford, Rabbi Kessler was also a civil rights advocate who marched with Dr. Martin Luther King, Jr. during the 1960s, an activist who spoke against the Vietnam War, and a founder of Rabbis for Human Rights. The memory of his life is a blessing to many in the Hartford area and beyond.

Asked about the appointment, President Joel N. Lohr commented, “Whether in the realm of Biblical Studies or Jewish-Christian Dialogue, it’s hard to think of a more important or respected scholar and teacher than AJ Levine. If ever there was a ‘rock star’ in this realm, Professor Levine is it. To name her professorship in honor of Rabbi Kessler is a double blessing. What a boon for Hartford.”

Internationally renowned and a sought-after speaker, Dr. Levine has published over thirty books including The Misunderstood Jew, Short Stories by Jesus, five children’s books (with Sandy Eisenberg Sasso), and The Bible With and Without Jesus (with Marc Z. Brettler). With Brettler, she also edited the celebrated Jewish Annotated New Testament. Dr. Levine is a prominent and prolific scholar of Christian-Jewish relations, early Christianity, and feminist biblical interpretation. A once self-described “Yankee Jewish feminist who teaches in a Christian divinity school in the buckle of the Bible Belt,” Dr. Levine was raised in a predominantly Catholic neighborhood in North Dartmouth, MA. She grew up knowing and loving many aspects of the Christian tradition, even while she herself remains a committed Jew. In 2019, she became the first Jew to teach a New Testament course at the Pontifical Biblical Institute in Rome. In 2021, she was elected to membership in the American Academy of Arts and Sciences.

“The appointment of Dr. Levine allows us to deepen our commitment to interreligious engagement, in this case by drawing from her commitment to understanding Jesus, Paul, and the New Testament in their Jewish contexts. Dr. Levine’s expertise – and her engaging personal style – will provide people in a variety of venues new opportunities for learning, especially in the fields of Jewish-Christian relations and Biblical Studies,” said Dean David D. Grafton.

Dr. Levine will reside in Hartford each year during the late spring for a summer session course. She will teach, give public lectures, engage in talks and presentations at local places of worship, and work with MA and Ph.D. students. An inaugural public lecture will take place at Beth El Temple in the spring of 2022 to recognize the appointment and honor Rabbi Kessler’s legacy.

This position is made possible through the kind and generous support of numerous donors, including a lead gift from Abigail Kessler-Hanna, M.D., Rabbi Kessler’s daughter. Those wishing to support the professorship into the future can do so through Hartford Seminary’s Development Office.

Commenting on the appointment, Dr. Kessler-Hanna remarked, “My father dedicated his life to valuing human beings as individuals and collectively as members of diverse groups, which required a knowledge of self-purpose, respect for others, and an unwavering quest for a universal truth. Dr. Levine’s professorship at Hartford Seminary, named in his honor, is a timely appointment that will build upon his work and Dr. Levine’s own seminal work in Jewish Studies and Jewish-Christian relations. I look forward to attending her lectures, especially the inaugural lecture at Beth El Temple in 2022.”