The Rev. Nick Mumejian, Managing Editor of The Muslim World, was one of several presenters at the recent European Academy of Religion meeting with Hartford Seminary connections.

The Rev. Mumejian presented a paper on reconciliation with a former visiting professor, Davide Tacchini.

Elena Dini, a 2014 graduate of the International Peacemaking Program, presented another session on interreligious dialogue.

Jason Welle OFM, a Franciscan Friar who was guest editor of The Muslim World and is dean of the Pontifical Institute for Arabic and Islamic Studies in Rome, was also at the conference, which held at the University of Münster in Münster, Germany. 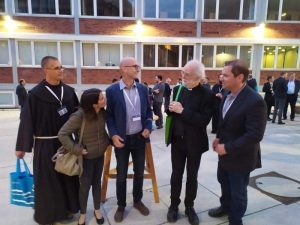