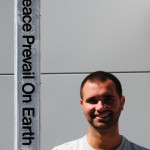 Give us a brief description of your background (home country, family, education, etc.)

My name is Andrew Luisi, I am from a suburb of New York City. I received my M.A. in Nonprofit Management and Leadership from The Hebrew University of Jerusalem where I interned with the Interrreligious Coordinating Council in Israel. My interest in interfaith conversation became solidified at Wake Forest University, where I earned a B.A. in Religion and met Eboo Patel. Prior to coming to Hartford, I lived in Germany, studying the language and, informally, the works of Martin Buber and Rudolf Steiner. I am currently pursuing a Graduate Certificate in Islamic Studies and Christian-Muslim Relations at the seminary.

What got you interested in interfaith dialogue and the program at Hartford Seminary?

I was led on the path of bridge-building and promoting plurality as a sophomore at SUNY Rockland Community College, the town over from Monsey, New York. During this time, I studied under a Chabad rabbi to convert to Orthodox Judaism. It was then that I realized that through studying another religion, I could learn more about the religion I was raised into; it being Roman Catholicism.

For me, a vocational study of interfaith conversation requires an institution that encourages conversation, deepens understanding and cultivates respect in a multi-faith environment; thus, Hartford Seminary was the ideal place to study. Hartford Seminary’s values such as affirming the common humanity of all people, committing to diversity and moving beyond toleration to critical engagement are all values that I hold dear and are imperative for the sustainment of this world: Hartford Seminary embodies pluralism and learning from the other so each individual can learn and grow.

Hartford Seminary has already deepened my own religious identity and helped me articulate the connection between identity and inspiration, discovered shared values among the community and built a sense of cooperation and collaboration.

Briefly describe the conflicts that you would like to address at home after your year at Hartford Seminary.

There are two main conflicts that I would like to address in the USA and elsewhere in the world. I would like to use Martin Buber’s “I and Thou” methodology as a tool to necessitate sincere dialogue among the youth in order to act positively and collaboratively on common issues.

Expanding this methodology to a worldwide scale, I would like to work within Islamic and Christian circles in order to alleviate the suffering of refugees amid this crisis. The latter seems an impossible task; however, it is an absolute necessity if we would like to even have a platform to converse about what is personally important in this world.