The Macdonald Center for the Study of Islam and Christian-Muslim Relations is the country’s oldest center for such study, opening in 1973.

The Macdonald Center challenges scholars, students, the media, and the general public to move beyond stereotypes and develop an accurate awareness and appreciation of Islamic religion, law and culture.

It is committed to the premise that through intensive study and academically guided dialogue, mutual respect and cooperation between Muslims and Christians can and must develop.

The Macdonald Center is an academic unit within Hartford Seminary dedicated to scholarly research, teaching, and publication. It is responsible for the specialization in Islamic Studies in the Master of Arts in Interreligious Studies program, the Islamic Chaplaincy Program, the Ph.D. in Islamic Studies and Christian-Muslim Relations, and global study tours.

Under the Seminary’s aegis, the Center edits the scholarly journal, The Muslim World, which is published quarterly and reaches subscribers in 65 countries.

The Duncan Black Macdonald Center is an academic unit within Hartford Seminary dedicated to scholarly research, teaching, publication and communication with the public.

The Center is responsible for the Islamic Studies and Christian-Muslim Relations component of the Seminary’s MA and Ph.D. programs, and the Islamic Chaplaincy Program. Named for Professor Duncan Black Macdonald, one of the nation’s early, pre-eminent scholars of Islam who taught Hebrew, Arabic, and Islamic studies at Hartford Seminary from 1892-19323, the Macdonald Center is the country’s oldest center for such study.

Academic courses taught through the Macdonald Center cover a range of topics, including Islamic history, law and theology; study of the Qur’an, sunnah and hadith; contemporary social and political movements; Christian-Muslim relations in their historical and current contexts; Sufism; Arabic; and comparative religion.

A major part of the activity of the Macdonald Center is involvement in interfaith dialogue, with particular emphasis on Christian-Muslim relations. All Center faculty and personnel are committed to the importance of better understanding between and among faiths, and to supporting efforts toward building relationships based on tolerance and trust.

The Macdonald Center provides resources as well as a gathering place for its local and international students, and participants in Center activities find it a “safe place” where they are free to share their perspectives on a range of issues. While the Macdonald Center is frequently the locale for conversations among members of several religious traditions, often focusing specifically on Christian-Muslim-Jewish interactions, its history and particular expertise is interaction and dialogue between Muslims and Christians.

A major part of the activity of the Macdonald Center is dedicated to relationships with the wider community. Faculty regularly speak and participate in meetings and conferences in the Greater Hartford area, nationally and in the international context, and are available to provide information for members of the press and other media, researchers, local churches and institutions, and the public in general. 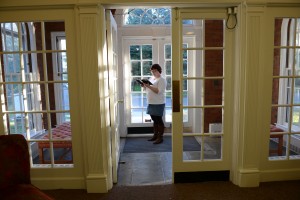 The Macdonald Center challenges scholars, students, members of religious institutions, community groups, the media and the general public to go beyond stereotypes and prejudices and develop a profound awareness and appreciation of Islamic religion, law and culture. It is committed to the premise that through intensive study and academically guided dialogue, mutual respect and cooperation between Muslims and Christians can and must develop.

The Macdonald Center is an academic unit within Hartford Seminary dedicated to scholarly research, teaching and publication. The Center is responsible for the Islamic Studies specialization component of the Seminary’s Master of Arts in Interreligious Studies degree program. The Seminary also offers an Islamic Chaplaincy program to train and certify institutional chaplains. Macdonald Center faculty are responsible for instruction in the study of Islam and Christian-Muslim relations concentration of the Doctor of Philosophy degree program.

Under the Seminary’s aegis, the Center edits the bi-annual scholarly journal, The Muslim World, which reaches subscribers in 65 countries. The Muslim World is dedicated to the promotion and dissemination of scholarly research on Islam and Muslim societies and on historical and current aspects of Christian-Muslim relations.

It also sponsors lectures and programs each semester, as well as the biennial Willem Bijlefeld lecture in Islam and Christian-Muslim relations. In these ways, the Center works to promote understanding between the two faiths and to foster mutual tolerance in local, national and worldwide communities.

More information on the history of Hartford Seminary and the Macdonald Center:

One Hundred Twenty-Five Years of Islamic Studies at Hartford Seminary

A Century of Arabic and Islamic Studies at Hartford Seminary

By Dr. Willem A. Bijlefeld for The Muslim World, April 1993

Scholars and participants in the Macdonald Center’s programs can take full advantage of the Hartford Seminary Library, roughly half of whose 60,000 volumes focus on Islamic studies and the historical relationship between Christians and Muslims.

The Library also houses special research collections, including 1,600 Arabic Islamic manuscripts, 1,300 volumes of the Arabian Nights in various languages and editions, and a collection of medieval European literature on Islam.

The Macdonald Center, in consultation with the President and Dean, organizes international study seminars. These seminars provide participants with a rare opportunity to meet Muslim, Christian, Jewish and other religious leaders in the Middle East, Southeast Asia and elsewhere and to learn about local efforts at inter-faith cooperation.

Considered one of the main founders of Arabic Studies in the United States, the Scottish Presbyterian cleric Duncan Black Macdonald taught for 40 years at Hartford Theological Seminary. His multifaceted scholarship opened new avenues in the study of Islam as well as of the Hebrew Bible, and paved the way to new forms of Christian missionary work.

Macdonald was born in Glasgow in 1863, the sixth and last child of Thomas Macdonald (1813-1905) and Margaret Black (1822-91). In November 1880, he entered the University of Glasgow. In addition to his Hebrew classes, he took elementary Arabic and Syriac. He also read a number of Arabic texts, notably while working as a cataloguer in the library of the University’s Hunterian Museum, where he became interested in the early Arabic translations of the Bible. He received his Master of Arts degree in 1885 and a Baccalaureate in Theology in 1888. The same year, he received his licence from the Presbytery of Glasgow. In 1890-1, he studied with Edward Sachau, and met with Ignaz Goldziher in Berlin. Besides Hebrew, Arabic and Syriac, he also learned Ethiopic.

In 1892, Macdonald was appointed as instructor in Hebrew at Hartford Theological Seminary. However, he was back in London that same summer to study Egyptology under F.L. Griffitte and to read Arabic manuscripts of the Gospels at the British Museum. Egyptology also drew him back to Berlin during the summer of 1893, but his workload at Hartford did not allow him to go further into this discipline. During these early years at the seminary, Macdonald taught not only Hebrew but also Arabic and Islam.

His research was mostly devoted to approaching Islam through original sources in Arabic, be it Sufi mysticism as understood by al-Ghazālī, or the life of ordinary Muslims as illustrated in The Arabian nights. The number and quality of his publications confirm his dedication to scholarship during these years. These include the three books analysed below, several academic articles, multiple entries for various encyclopaedias, and innumerable reviews. He also became a popular lecturer at Hartford as well as in other places. For example, in 1904 he delivered a paper on ‘The problems of Muhammadanism’ before the International Congress of Arts and Sciences at St Louis, Missouri.

In 1898, Macdonald married Mary Leeds Leffingwell Bartlett of New York, who was some 12 years older than he. That same year, the newly-married couple built a cottage in Pemaquid Point, Maine, where they would spend most of their summers. They were always very close. Mary knew about all her husband’s work and ‘followed it and understood it’ (Macdonald, ‘Autobiographical notes’, p. 13). She typed and criticised all his writing. She even learned some Arabic and shared his interest in Muslim occultism and in ‘esoteric phenomena generally’ (Macdonald, ‘Autobiographical notes’, p. 14). Their marriage, which did not produce any children, lasted happily until Mary’s death in 1929.

A particularly important year in Macdonald’s career as an Islamicist was 1908. Granted sabbatical leave from the seminary, he and his wife went to the Middle East. They travelled to Algiers and then Cairo in late 1907. After six months in Egypt, followed by short stays in Jerusalem, Damascus, Constantinople and England, they were back in the States at the beginning of November 1908. These were the only months Macdonald ever spent in the Islamic world. In Cairo, he showed almost no interest in ancient Egypt or Pharaonic sites. All his attention was instead given to the Muslim population and the Islamic monuments of Cairo, which he explored during numerous walks. He bought many books and searched for manuscripts of The Arabian nights, met with a number of personalities and enjoyed improving his spoken Arabic by talking with ordinary people. He was also able to witness directly the inadequacy of the way some missionaries conceived of their work among Muslims. For the rest of his life, he would remain under the spell of what he had experienced during this sabbatical.

Back in Hartford, Macdonald resumed his teaching duties and research. His workload and fame increased. In 1909, he received a Doctorate of Divinity from Hartford’s Trinity College, and in 1920 an honorary doctorate from Glasgow University. In 1912, he became special lecturer at the Cambridge Episcopal Divinity School, the Haskell Lecturer on Arabic Literature and the Literature of the Hebrews at Oberlin College in 1914, and lecturer on the Old Testament at the Berkeley Divinity School, New Haven, in 1917-18. His three books on Islam had been generally well received and he maintained frequent epistolary exchanges with several of the greatest Arabists of the time, mostly notably Goldziher, Nöldeke, Snouck Hurgronje, Asin Palacios and Massignon.

Macdonald also developed an interest in the training of missionaries. As early as 1900-1, he had lectured on missions in Egypt and Arabia, Muslim missionary activity and the Muslim attitude towards the Christian scriptures, in addition to his normal courses. In 1910, he arranged for the Anglican missionary W.H.T. Gairdner (1873-1928), with whom he had become acquainted in Cairo, to come to Hartford, and Gairdner stayed with him for five months. In his autobiography, he writes that it was at this point that Gairdner ‘passed from controversy to persuasion’ vis-à-vis Muslims (Macdonald, ‘Autobiographical notes’, p. 16). In a letter to a student, he is less positive and writes that ‘Gairdner failed’ (Macdonald Papers, no. 149988). In 1911, when the Kennedy School of Missions was organised at Hartford Seminary, Macdonald became head of its Muhammadan Department and endeavoured to have the ideas with which he had come back from Egypt applied, i.e. ‘to understand Islam from the inside, to creep into the Muslim mind and discover how it felt there’ (Macdonald Papers, no. 149984). Macdonald kept this position until 1925. As an emeritus professor, he continued to be involved in the Kennedy School. Despite being interested in missionary preparation, Macdonald once confessed that he would himself ‘have never made a good missionary’ (Macdonald Papers, no. 149988).

During a dinner for his 70th birthday in 1933, a group of Macdonald’s students honoured him by offering him a copy of The Macdonald presentation volume just published by Princeton University Press. Now retired, he continued publishing important studies about The Arabian nights, Islam, Christian missions and other topics. He contributed several Islam-related entries to The encyclopædia of Islam, The Jewish encyclopedia, The encyclopædia Britannica, and The encyclopædia of religion and ethics, and he also reviewed an impressive number of books for journals such as The Hartford Seminary Record, The Moslem World, The International Review of Missions, and The Nation. These are listed in ‘A bibliography of Professor Macdonald’s writings up to his seventieth birthday, April 9, 1933’, in The Macdonald presentation volume, pp. 471-87.

In the late 1930s, Macdonald’s health declined, and in 1941 he was forced to move from his house in Sigourney Street, Hartford, to a convalescent home in South Glastonbury. He passed away there, after a long illness, on 6 September 1943. His ashes are buried next to his wife’s grave in Hartford’s Old North Cemetery.